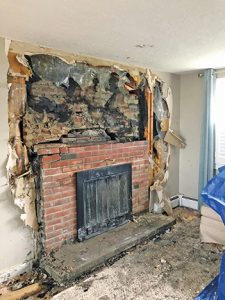 The chimney at 140 Balsam Street in Fairhaven had opened mortar joints that allowed heat and embers to catch the wood on fire causing a fire in the wall on 5/9/22. Smoke detectors alerted the occupants and there were no injuries. Photo courtesy of Alice Moulding Walczak.

On Monday, May 9, 2022, at 05:04 a.m., the Fairhaven Fire Department responded to a report of a fire around a fireplace at 140 Balsam Street in Fairhaven. The first crew arrived at 05:15 a.m and reported the fire around the chimney. Crews opened up the walls around the fireplace and extinguished the fire. The fire was declared under control at 05:25 a.

Firefighters remained on scene performing salvage and overall operations and cleared the location at 06:29 a.m.

No civilians or firefighters were injured, and the family was alerted to the fire by smoke detectors in the structure.

The occupants used the fireplace the prior evening. The unlined chimney had several mortar joints that were opened to the structural members behind the wallboard. Radiant heat and embers from the fireplace caused the wood frame members above the fireplace to ignite.

The house is owned by Jim and Alice Walczak.

“It was a rough early morning/ day, 5 a.m.,” wrote Ms. Walczak on her Facebook page. “Please make sure your fire alarms are working well.  Thankfully ours was. Lots of clean up, work, renova­tions, and replac­ing of furniture. The smell is tough. But we are fine and that is all that counts.  Thank you for all your thoughts and well wishes. The heart is full from us to you.”