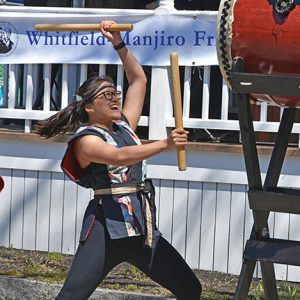 A member of the Shin Daiko Japanese drumming group performs on Cherry Street in front of the Manjiro Friendship Society Museum during the Cherry Blossom Festival on 5/1/22. Photo by Beth David.

The annual Cherry Blossom Festival, not held for two years because of the pandemic, was back in full force on Sunday, 5/1/22. Organized by the Whitfield-Manjiro Friendship Society, the festival showcases Japanese culture and highlights the special relationship Fairhaven has with Japan dating back more than 180 years.

In 1841 young Manjiro, 14, was stranded on an island with four others while fishing off the coast of Japan, where they were rescued by Captain William Whitfield of the whaling ship John Howland. Manjiro returned to Fairhaven with the ship in 1843, and is believed to be the first Japanese person to live in the United States. Japan was a closed society in the 1840s.

Eventually, Manjiro returned to Japan, risking arrest because he had lived out of the country. He became instrumental in opening up Japan to the west. He achieved a heightened status and became Manjiro Nakahama, earning a last name.

The house at 11 Cherry Street in Fairhaven is believed to be the first place that young Manjiro laid his head to sleep on U.S. soil. The house is now home to the WMFS and is a museum. 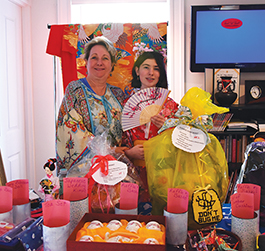 L-R: Maureen Lavigne and Ashley staff the raffle table at the Whitfield-Manjiro Friendship Society Museum during the Cherry Blossom Festival on 5/1/22. Photo by Beth David.

Fairhaven also has a sister-city relationship with Manjiro’s home town, now called Tosashimizu. The two towns alternate hosting the Manjiro Festival each year. Due to the pandemic, the festival was not held in 2021. It seems to be on track for October of 2023 in Fairhaven.

The Naka­ha­mas and Whit­fields still main­tain their family ties and will often travel to the Manjiro Festivals.

On Sunday, attendees could tour the museum for free, witness origami, have their names written in Japanese, listen and watch a taiko drumming concert, and see an Aikido demon­stra­tion. Exhibits in the museum included a kimono display, docu­ments of Manjiro’s story, raffles, ad a flower arranging display.

“This is fantastic,” said WMFS President and CEO Gerry Rooney, noting the perfect weather and the presence of the Consul General of Japan, all five Select Board members, and Rep. Bill Straus, along with about 100 members of the public enjoying the activities.

Mr. Rooney said the focus of the WMFS is to get the cultural center completed. The carriage house in the back is being renovated to include classrooms, a kitchen, reception area, and will be fully ADA compliant. Funding has been slow, though, but he project is coming along. Funds from the Community Preservation Act, Mass. Cultural Council, and private funds are being used.

“She was excited to show me the house and the history,” said Ms. Roland. “I love things like this.”

She said she remembers her grandmother in Virginia having a stove like the one in the museum.

Ms. Regan said she has close relatives who live in Japan so she is especially interested in the Manjiro story. 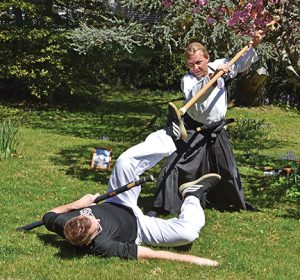 Joshua Hatcher, an instructor with Aikido of Bristol County, demonstrates use of the long pole against an opponent with a samurai sword at a demonstration during the Cherry Blossom Festival in Fairhaven on 5/1/22. Photo by Beth David.

Other people just oohed and aahed as they walked around.

“This is so awesome,” said Susan Wood.

Learn more about Manjiro’s extraordinary story and the Manjiro Trail at https://whitfield-manjiro.org. All tours of the museum are by appointment only. Call 508-858-5303 or 508-995-1219, or email Gerry@WMFriendshipHouse.org.

Contact the Fairhaven Office of Tourism at https://fairhaventours.com for information on the self-guided Manjiro Trail. 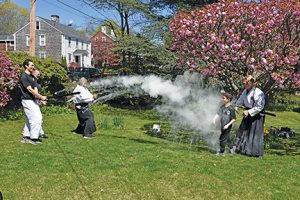 Under the careful eye of Joshua Hatcher, an instructor with Aikido of Bristol County, student Miles throws a powder egg at his opponents during a demonstration at the Cherry Blossom Festival in Fairhaven on 5/1/22. Photo by Beth David. 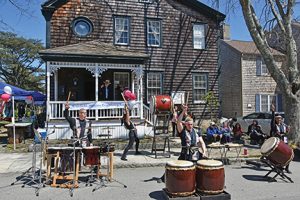 Members of the Shin Daiko Japanese drumming group perform on Cherry Street in front of the Whitfield-Manjiro Friendship Society Museum during the Cherry Blossom Festival on 5/1/22. Photo by Beth David.