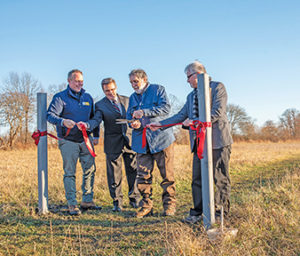 Officials and members of the public gathered in a Fairhaven meadow in the November sunshine on Tuesday, 11/25/19, to celebrate the opening of Carvalho Farm, the Buzzards Bay Coalition’s newest public reserve. This coastal property features a native grassland meadow, active agricultural field, forested wetlands, and salt marshes on 61 acres along the shore of Nasketucket Bay.

“It was more than 20 years ago that the Carvalho family began a discus­sion with the Buzzards Bay Coalition about conserving their beautiful farm here on Shaw’s Cove,” said Mark Rasmussen, Buzzards Bay Coali­tion Presi­dent. “Their thought­ful­ness and deep commit­ment to this land has now suc­ceed­ed in ensuring that these scenic open fields and sensitive coastal wetlands will always be here and always bear their name. I know that genera­tions to come will thank them for their vision.”

For more than a century, the property was owned by the Carvalho family and served as a base for dairy operations, as well as land for pasture, corn, and hay.

When the Carvalho family decided it was time to sell the land, the Coalition knew there was significant risk the land could be converted to residential development. Carvalho Farm’s open fields on Shaw Road make these pastures and fields excellent for agriculture, but they also make this site easy to build on, and its rural, waterfront location make it a highly desirable home site. 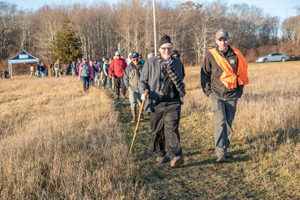 L-R: Joe Costa and Mead Binhammer lead the way hiking the Carvalho Farm Trail on Shaw Road in Fairhaven after a ribbon cutting ceremony officially opening the property to the public on 11/26/19. Photo by Glenn C. Silva for the Neighb News.

Attendees exploring the site marveled at how their surroundings changed as they walked the trail, from open meadow, to wetland-studded woods, to scrubby coastal forest and salt marsh. A shared favorite spot on the trail was the view from Indian Rock, a massive boulder in a clearing at the trail’s end, where visitors could look over acres of salt marsh colored orange by the setting sun.

With the support of Fair­haven Community Preservation Act (CPA) funds, the Coalition pur­chased the land in 2017 and placed it under a conserva­tion restriction that per­manently protects it from develop­ment. Under this conservation restric­tion, the property will also continue to support agricultural operations.

The property is at 201 Shaw Road, Fairhaven. Parking is on the south side of the road next to the Carvalho Farm field.

For more information about this property and other places around the Bay to explore, visit www.savebuzzardsbay.org.