“We still don’t know what we hit. We were more than 1000 yards off shore at the peak of high tide, and in safe water according to navigation sys­tems and boating experience. We ended up 300 yards offshore as we were disabled for a half hour waiting for help! [William Brown, passenger]

Marine rescue assets including TowBoat US responded to a cabin cruiser taking on water after apparently striking an object about 1000 yards south of West Island Town Beach, Sunday afternoon at 5:55 PM, July 24, 2022. A passenger called 911 to say they were on a vessel taking on water off West Island.

At least seven persons were on board with some trying to bail the boat out with buckets.

Pumps were placed on the stricken 35-foot vessel as the wind and sea began to pick up out of the southwest at 20 knots. 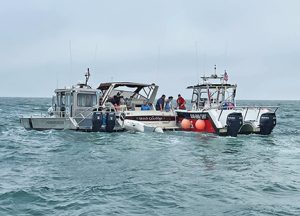 The Mattapoisett Harbormaster boat (LEFT) and TowBoatUS (RIGHT) assist the Irish Goodbye when the 35-foot cabin cruiser hit something off West Island Town Beach and started to take on water on 7/24/22. Photo from Mattapoisett Fire Rescue Facebook page.

“Nobody panicked and we all went to work to keep the vessel afloat. The water never got more than ankle deep in bilge. The pumps Tow Boat pro­vided kept up with the water with ease.”

While the pumps did their work, the passengers were taken off the boat and transferred to the Mattapoisett Harbormaster’s boat. The vessel’s Captain was reported as Jared Jackson. The vessel named Irish Goodbye was being towed inside Padanaram Harbor. Lifts were standing by at a nearby boatyard to lift the 20,000-lb boat out of the water.

At least five rescue boats from Fairhaven-New Bedford and Harbor­master were on scene. The incident was captured with our Webcam at Town Beach.

An ambulance was placed on stand-by at Hoppy’s Landing. There were no injuries reported as of post-time.