Cathy Melanson speaks to the crowd at a ceremony on 12/4/19 to name the westbound side of the I-195 bridge on River Avenue in Fairhaven for SPC-4 Henry Anthony Chevalier who was killed in Vietnam, and eastbound side for Staff Sgt. Donald Roger Desmarais. Photo by Glenn C. Silva for the Neighb News.

On 12/4/19, town and state officials, friends and family of Staff Sergeant Donald Roger Desmarais and SPC-4 Henry Anthony Chevalier, who were both killed in Vietnam in 1969, gathered at the overpass of I-195 on River Avenue in Fairhaven for the dedication of the bridge to the two men. The westbound side is named after Mr. Chevalier; the eastbound side is named after Mr. Desmarais.

At the ceremony, MassDOT State Highway Adminis­trator Jonathan Gulliver told the crowd that naming a bridge in Massachusetts is not an easy process. He said bridges hold a lot of special meaning to communities. They connect neighborhoods and people. They are a meaningful part of the community, more than just the utility they serve.

Naming them is reserved for only the best people in the commonwealth, he said. It is an honor that will stand the test of time.

“We want them to be remembered forever,” said Mr. Gulliver. “And this bridge will forever bear their names. And everyone who drives by these bridges and sees those markers are going to know that they are named for people who gave the ultimate sacrifice for their country.”

Cathy Melanson said she has been working on the dedication since 2012 when the Vietnam Moving Wall came to Fairhaven.

She was 10 years old when the news came that Mr. Desmarais, a neighbor, had been killed. The kids were out play­ing in the yard, the family was called in. 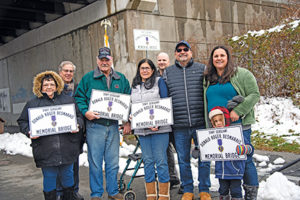 After a ceremony on 12/4/19, officials, friends, and family pose with replicas of the sign that now officially dedicates the eastbound side of the I-195 bridge on River Avenue in Fairhaven to Staff Sgt. Donald Roger Desmarais, who was killed in Vietnam; the westbound side was also dedicated to SPC-4 Henry Anthony Chevalier. Photo by Glenn C. Silva for the Neighb News.

“And then they were all crying,” said Ms. Melanson. “And that was the day I knew what war was because it came very close to me.”

Ms. Melanson told the crowd she was “overwhelmed” that they were all there. It has been 50 years, she said, time marches on. She told the crowd that we hear on news reports about service members being killed in the line of duty.

“Those people are dying for all of us here, for our freedom,” said Ms. Melanson. “And to have this bridge named after Henry and Donald is just a small, and I mean very small, token of our appreciation for their giving their lives for our freedom.”

The event is available for viewing on the town’s cable access page at: https://www.fairhaventv.com/single-post/2019/12/04/Fairhaven-I-195-Bridge-Dedication

Mr. Chevalier was laid to rest at Riverside Cemetery in Fairhaven. Mr. Desmarais was interred at Rural Cemetery in New Bedford in the veterans section. 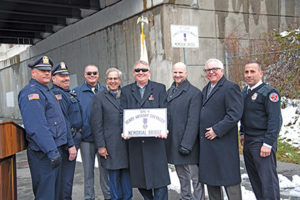 After a dedication ceremony on 12/4/19, Fairhaven and state offiicials stand in for family with a replica of the sign that now officially names the westbound side of the I-195 bridge on River Avenue in Fairhaven for SPC-4 Henry Anthony Chevalier who was killed in Vietnam; the eastbound side was also dedicated to Staff Sgt. Donald Roger Desmarais. Photo by Glenn C. Silva for the Neighb News.