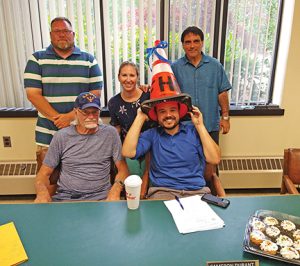 At its meeting on Monday 7/25 the Fairhaven Board of Public Works met with two people about driveway waivers and briefly discussed a project at Memorial Park. The board also thanked board member Cameron Durant for his years of service, as it was his last meeting.

Mr. Durant stated that he was hired as the new Human Resources Director for the town and must leave the BPW.

BPW Vice Chair Robert “Hoppy” Hobson said he wanted to give a big thanks to Mr. Durant for his service to the BPW. He said Mr. Durant will be a huge help to the new Town Adminis­trator, and hopefully Mr. Durant can help the BPW have a good relation­ship with the new TA.

Mr. Durant said leaving the BPW was bittersweet and he felt like he could cry.

BPW chairper­son Brian Wotton also thanked Mr. Durant for all he has done for the BPW. Mr. Wotton said they need to have the Select Board announce that the BPW is looking for a new board member to replace Mr. Durant and for residents to send in letters of interest.

Mr. Britto said he immediately stopped the project when he got a letter from the town, and went to the BPW office to get all the correct paperwork done. However, he was informed that he had to go before the board. He apologized and said he just wanted to get it all sorted out.

BPW Superintendent Vinnie Furtado said he remembered Mr. Britto coming in for a driveway waiver for the first side of his driveway.

Mr. Wotton said Mr. Britto would need a driveway waiver for the width of the driveway, and he would have to sign paperwork agreeing that it is Mr. Britto’s responsibility if the town damages the cobblestone apron with a plow accidentally.

The board voted unanimously to grant the waiver for a 40 foot opening and a cobblestone apron.

The board also met with Joshua Ferreira about a driveway waiver on Spring Street. Mr. Ferreira said he wanted to extend his driveway and make it into an L-shaped driveway. He said he just wanted to be able to fit least two cars in the driveway.

The board voted unanimously to grant the waiver.

In another matter the board discussed the Conrad Roy lll Memorial 5k Walk/Run. Mr. Furtado explained that they need the approval of the board to allow the organization to use Fort Phoenix. The walk/run will take place on Saturday, 9/10/22, and will start and end at Fort Phoenix from starting at 9 a.m.

BPW Vice-Chairperson Robert “Hoppy” Hobson said the Roys are a great family and they are doing this for their son. He said it is a good thing.

The board approved the event unanimously.

Mr. Furtado also told the board that he has been informed that people would like the paths and sidewalks at Memorial Park to be paved. He said he would look into the cost and see if they could us Commu­nity Preservation Act funds for the project. The memorial is on the corner of Green and Union Streets.

In another matter Mr. Furtado said he met with the tree warden and the police chief about standardizing operating procedures for how the tree warden should be notified. He sai he was still waiting for information.