Board of Health members resorted to sniping, snide remarks, accusa­tions of ethics violations, and accusations of disrespect throughout their nearly two-hour meeting on 9/13/18. It appeared that months of tensions roiled to the surface with BOH chairperson Peter DeTerra clashing with Health Agent Mary Freire-Kellogg or BOH Vice Chair Jeannine Lopes on nearly every agenda item, and Ms. Lopes jumping in to defend Ms. Freire-Kellogg nearly every time she clashed with Mr. DeTerra.

BOH member Michael Silvia got roped in once or twice, but mostly tried to play middle-of-the-road.

The arguments ran the gamut: From the old fight about how Ms. Freire-Kellogg logs her time, to disagreements about the duties of the chairperson and the authority of the board as a whole and as individuals.

The first of the contentious items started with Ms. Lopes asking how it was that the two men on the committee were signed up to be able to log into a new time manage­ment system that she did not even know had begun. Ms. Lopes said that Finance Director Wendy Graves was supposed to set up a training for her, but it never happened.

Mr. DeTerra said he heard about it at a department head meeting that he was thrown out of by Town Adminis­trator Mark Rees, saying that Mr. DeTerra was not a department head. He said Ms. Freire-Kellogg was in the meeting, and had not been kicked out, so she should have notified the board.

The two went back and forth about who should know what and tell whom.

Mr. DeTerra said he tried to find out but was kicked out of the meeting.

The two went back and forth, yes I am, no you’re not, for a bit.

“No town official should get thrown out of a meeting…in this town hall,” said Mr. Silvia.

And that set the stage for the rest of the meeting.

Mr. DeTerra said he had problems, too, with the system and how it works. He said he wants a system that allows him to know where the health agent is at all times.

“I don’t even know if you show up,” said Mr. DeTerra, and said he would make a motion for her to sign in and out for lunch, etc.

“I’m making a motion that you calm down,” said Ms. Lopes.

Then they sniped about whether or not they could discuss the motion because it had not been seconded.

Ms. Lopes said that the board always seems to go back to past practices, and asked Mr. DeTerra to point out when the board needed to know every move the health agent made.

“That has never, ever, ever been required before, so why you’re trying it now, I don’t know,” said Ms. Lopes. “And I’m going to add this to my little statement: That this is bullying and harassing and I’m..”

“Let me finish,” said Ms. Lopes. “We have had two lawsuits with your name on them. I am not going to entertain a third.” 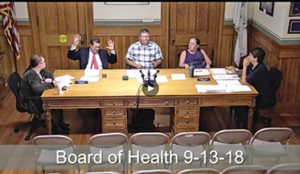 In this screen shot from the online vide of the Fairhaven Board of Health meeting on 9/13/18, Board member Michael Silvia (left) raises up his hands to stop the sniping between Chairpeson Peter DeTerra and Vice Chair Jeannine Lopes. Mr. Silvia asked that the motion that had just been voted on be withdrawn. Mr. DeTerra had announced it passed, but Mr. Silvia had abstained, Ms. Lopes had voted “no,” and Mr. DeTerra had voted “yes.” Photo from Fairhaventv.com

Then Mr. DeTerra called for a vote on his motion to have the health agent sign in and out in the morning, at lunch, etc.

He declared it passed, except that Mr. Silvia had abstained and Ms. Lopes had voted “no.”

Mr. Silvia asked that the motion be withdrawn, and tried to play the middle.

“I understand the chairman’s anger and frustration,” said Mr. Silvia, amid long pauses, saying that the health agent should be in the office, at lunch, or out on town business.

“This has never gone on before so I would like a logical explanation of where this is coming from,” said Ms. Lopes, adding that ever since Ms. Freire-Kellogg was hired, Mr. DeTerra was micromanaging. “You want to know every waking minute.”

She said he could call the office and the assistant would tell him where Ms. Freire-Kellogg was. Mr. DeTerra said he did not get an answer to his email that day and got no explanation. He also said he was tired of going to the office and being ignored: “No one wants to talk to me.”

And so it went, with item after item.

During a discussion of fees, Mr. DeTerra said he did not want to raise fees at this time.

“Reason being? You raise fees, you hurt business, that’s why,” said Mr. DeTerra raising his voice.

“Do you know what, Pete? We need to adjourn this meeting because I’m not going to sit here and talk to you like an idiot,” said Ms. Lopes.

Mr. DeTerra went on the offensive on one agenda item, accusing Ms. Freire-Kellogg of signing a contract.

“She has no authorization to enter into a contract. It’s a board decision only,” said Mr. DeTerra.

“Let me tell you,” said Ms. Lopes turning in her seat to face him.

“It’s a board decision only,” interrupted Mr. DeTerra. “She overstepped her bounds.”

“I’m telling you the truth,” said Mr. DeTerra. “Watch yourself…you want me to watch myself?”

Then it was his turn to shift in his seat to face Ms. Lopes: “I feel there’s a conflict of interest,” said Mr. DeTerra.

“That’s a conflict of interest,” he said.

“What does that have to do with anything?”

“You want to talk ethics, Pete?” she asked.

Then they went back and forth about the signed paper, with Mr. DeTerra calling it a contract.

“I absolutely did not enter into any contract,” said Ms. Freire-Kellogg, saying it was a bid letter only.

But Mr. DeTerra latched onto the word “award” in the letter and would not let it go.

The letter was seeking bids to mow the grass at the landfill, which requires special equipment, and is a job Mr. DeTerra has done in the past. Ms. Freire-Kellogg had also prepared an award letter for the board to sign if they approved of the contractor.

“You’re just mad because you didn’t get it,” said Ms. Lopes.

“You sent it to landscapers, you didn’t send it to the right people,” said Mr. DeTerra, adding they do not have the right equipment.

Ms. Freire-Kellogg left the room to get the folder she used and Mr. DeTerra turned to Mr. Silvia and asked, “So what do you want to do with the landfill?”

“I can talk to my fellow board member,” said Mr. DeTerra.

“I’m a person on this board, too, and you need to respect that and respect me as a fellow board member,” said Ms. Lopes. “Instead of waving me off and always interrupting and turning your back on me. Enough is enough.”

In the end they voted to rebid the landfill mowing, 2-1, with Ms. Lopes voting “no,” although the matter of the folder seemed to have been forgotten.

In another matter, Ms. Freire-Kellogg asked for guidance on sending out public notifica­tions, and used the recent announcement by the water department that they might get water from New Bedford as an example.

“I asked for guidance, I got no response,” she said. “These are very serious things. These are public health concerns. This is what the board is supposed to be doing.”

She said watching her time clock was “trivial compared to someone possibly dying.”

“Can I talk about this one?” asked Ms. Freire-Kellogg.

“Talk about what?” said Mr. DeTerra. “You sit there trying to scold the board because you work all day?”

Ms. Freire-Kellogg said her personnel file was missing, and that she told the board in an email on 9/4.

Mr. Silvia said he thought that issue had been resolved, but Ms. Freire-Kellogg said it was not.

“Why didn’t you put it on the agenda,” said Mr. DeTerra.

She said she felt if was their job to write the rules and regulations and hers to enforce them.

“It seems like you guys want to get in the cruiser with me,” said Ms. Freire-Kellogg and added that she is alternately accused of talking to the board too much or too little.

Mr. DeTerra and Ms. Lopes then sniped back and forth about why a temporary food permit was in his truck instead of the office.

A motion passed, but it was unclear what the board was voting on, 2-1, again with Ms. Lopes dissenting.

Ms. Freire-Kellogg said there were a lot of policies and procedures that needed to be worked out.

“I’m not comfortable with the way things are going,” she said. “I feel like I’m doing my job, but I don’t feel like I have your support at all. At all.”

Mr. DeTerra mumbled something about “communications,” and she agreed.

Then he complained that she writes everything down and then runs to the Town Administrator.

“I didn’t run to anybody,” said Ms. Freire-Kellogg.

“I talked to [TA Mark Rees], too,” said Mr. DeTerra, and Ms. Freire-Kellogg responded maybe they needed to get him in there. too.

The final fun came at the end, when Mr. DeTerra brought up the case of 360 New Boston Road under “Other Business,” so it was not listed on the agenda.

“He wants to be compensated for putting it back,” said Mr. DeTerra. although it was unclear who gave the owners the okay to  reconnect.

Mr. Silvia said that the board should at least get a copy of the letter to the Town Adminis­trator if the board feared legal action.

“I will handle this and I will see the Town Administrator about this,” said Mr. DeTerra.

“One again,” said Ms. Lopes, Mr. DeTerra was going to “step over Mary,” and it was her responsibility to do it.

A few minutes later, Mr. DeTerra announced that the board had voted to send the letter to the TA, although it was unclear who seconded the motion, or if Mr. Silvia had voted at all.