The two candidates for Fairhaven Board of Health, vying for one open seat, participated in the candi­dates night on 3/15 sponsored by the North Fairhaven Improve­ment Associa­tion and Fairhaven Govern­ment Access TV-Channel 18. The questions were posed by Fairhaven High School student Elizabeth Edminster, and the evening was moderated by NFIA president Pauline Parker. Fairhaven votes on Monday, 4/6.

Barbara Acksen, who served on the BOH for one term some years ago, and newcomer to electoral politics Kevin Gallagher, will be on the ballot. 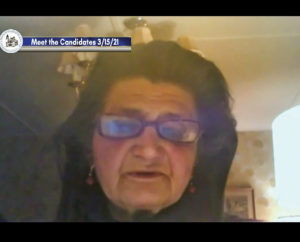 Dr. Barbara Acksen, candidate for Fairhaven Board of Health, participates via Zoom in a candidates night on 3/15/21. Screen shot from Fairhaven Government Cable TV by Beth David.

In her opening statement Dr. Acksen said she grew up in Fairhaven and lives in the family home, where she maintains her counseling practice, a career she has had for nearly 50 years.

She said she was “dismayed” to watch the board “come apart” this year. The BOH is central to the health and welfare of Fairhaven residents, especially when choosing a health agent. She realized there was no one qualified to ask the right questions of health agent candidates, so she asked to be on the screening committee and did serve in that role.

She said she was pleased that the town hired an experienced person.

Ms. Acksen said it would be helpful to have someone like her on the board, that the health department is a small department with big demands.

We wish COVID would go away, she said, but we can’t wish it away.

She said with the phase 4 opening of businesses, the health agent, who was pretty busy before, will have even more work to do. And there are still the beaches, sewerage, farms, etc., that all still have to be regulated.

She called the department “terribly underfunded,” or it would be bigger. 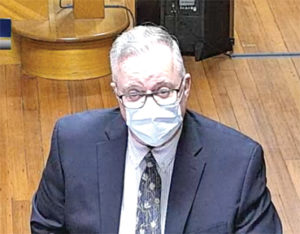 Kevin Gallagher, candidate for Fairhaven Board of Health, parrticipates in a candidates night on 3/15/21. Screen shot from Fairhaven Government Cable TV by Beth David.

Mr. Gallagher noted that he and Dr. Acksen had not officially met but he has “observed her career.” and he has a great deal of respect for her service.

They still were separated, as he was in the room, and she joined the night via Zoom.

Mr. Gallagher said his wife Cindy (Pires) is a graduate of Fairhaven High School, and they have three children that all grew up in Fairhaven and attended Fairhaven public schools.

“I did not grow up in Fairhaven,” said Mr. Gallagher. “I grew up in New Bedford, and I apologize for that.”

He said he went to Holy Family/ Holy Name High School and graduated from UMassD. He lost an election for state representative in 1992, but serves now on the Fairhaven Finance Committee.

He has been in public safety for 30 years, all of it with the Acushnet Fire Department, the last 17 years as chief.

He is also enrolled in courses at the Kennedy School of Government at Harvard, which more than “just sounds cool,” he said, adding that he tells his children “you never stop learning.”

Ms. Edminster asked both candi­dates what they would do on day one to bring back trust to the board.

Ms. Acksen said she would publish a statement to the public telling residents that the board would be giving them all the information they need. She said she would “make a commitment to the Board of Health business being health and not the politics of the others.”

She said the board should be sending out notices to the public directly, not from public access TV.

Mr. Gallagher said the fact that the question asks about trust shows that “trust has been lost.”

He said his campaign has been focused on three topics: Leadership, ethics and focus. If they look at those three things as goals, he said, they can start to rebuild the trust.

He said he wanted to bring back transparency, and has put out five ideas during his campaign, including notices for occupancy loads in businesses.

Mr. Gallagher said he would strive for a more “robust public outreach.”

He also said he would like to end the stipend for BOH members, saying “they don’t need it.”

And he wants to change the regulations, saying someone who gets elected should not be able to do inspections the next day, because it should not be done by politicians.

Mr. Gallagher also said he would like all meetings to have a public comment period, that the public has a right to comment, “particularly in the largest health emergency of our lifetime.”

Both candidates were asked about their experience with COVID-19, EEE, and other public health issues.

Dr. Acksen pointed to her eight years with a regional coalition of health and human services. She said the 738 members have been actively working on COVID issues. They are able to disperse informa­tion about resources and how other stresses affect people.

Dr. Acksen said she has dealt with the EEE threat when she was on the board last time. EEE is mostly about prevention, she said, and she has lectured about EEE.

“What we need to do is educate people,” said Dr. Acksen, adding that if you’re asking people to comply, they need to know why.

She said these are things she has worked on “for some time,” and joked that she knew nothing about chickens until she got on the board, but it was one of the things she learned about.

Mr. Gallagher said that first and foremost, he is a father. He has been dealing with COVID as all families have.

“This is new to us,” he said, adding that he is concerned about the psychological effects of the struggles of the last few months, especially in children.

In his job as fire chief, he said he has been “in the thick of COVID since day one.”

He has responded to medical emergen­cies and has seen the fear in the eyes of spouses.

He praised Fairhaven for administering more than 35,000 tests.

“Testing has been paramount,” he said, adding that he has been working regionally with groups to get vaccines to Fairhaven and Acushnet. He said they are ready to administer them bu the state pulled the rug out from under them.

Both candidates were asked if they felt the plans put in place by the BOH during the pandemic were appropri­ate and implemented correctly, and if any new plans should be put in place.

Ms. Acksen said she was happy to hear the BOH was working with another town because that is a good plan. She added, however, that she did not believe there were as many good plans as there could have been.

For instance, New Bedford has a weekly call to all residents, and Fairhaven should do the same thing.

She said she shared Mr. Gallagher’s concern about the mental health of people and the BOH can provide information on how people can get support, including on food insufficiency.

She also said they have to take into consideration that people are tired of the restrictions.

“We have to persuade people to comply,” said Dr. Acksen.

He noted that he is a code enforcer.

He said he records the public message every week in Acushnet that goes to the public every Friday night.

In closing Dr. Acksen said she is a “community clinician,” that the community is her patient.

She agreed with Mr. Gallagher about regulations, but said people also need to be heard and have venues to be heard.

She noted that she was on the board during a contentious time, the wind turbine controversy, and that people have to be able to speak.

She said she would find a way to include people, that the coalition of 732 members is all about sharing information.

“We are not working in silos,” she said, adding that she is an “independent candidate” who will work diligently tak­ing care of “your welfare.”

The BOH will be there to protect you and your family, she said.

Mr. Gallagher closed by saying that Fairhaven is at a crossroads, and things have “truly unraveled.”

“Those things need to be restored,” said Mr. Gallagher.

He said local government is where “things get fixed.”

He also made a plea to young people, telling them, “Please know that we are much better than we are right now. We are so much better as a community than we have been.”

He asked them not to give up on the old folks, saying “We can turn this around.”

To watch the video, visit https://livestream.com/fairhavenlive/events/8101110