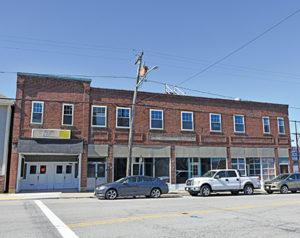 A cease and desist order is attached to windows of the front door and storefronts of the former Bijou Theater, 350 Main Street, Fairhaven, preventing the new owner, Julio Barbosa, from renovating 15 studio apartments and three retail spaces. Photo by Beth David.

Julio Barbosa likes big, old build­ings. So it’s no surprise he was seriously attracted to the old Bijou Theater building on Main Street in North Fairhaven.

He started working on the building, then he had to stop.

And that’s about where the story starts to veer off into two directions.

Mr. Barbosa said he got permits to do the work he was doing, then the building commissioner left and the interim commissioner revoked his permits. He said the new commis­sioner, Chris Carmichael*, has been intractable in helping him get back on track.

Mr. Carmichael said that Mr. Barbosa’s work went beyond the scope of the initial permit, but that he never should have been given any permits to work on the building in the first place.

The building has 15 small apart­ments, not exactly studio apartments, and not exactly standard one-bed­rooms either. Twelve of them have a kitchen area on one floor, then some steps up to a bedroom and a 3/4 bathroom.

There is no window in any of the kitchens in these apartments, and some only have small windows on the stairway or in the bathroom. 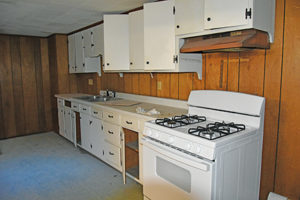 The kitchen area in one of the apartments on the back side of the building has a stairway to the left that leads to a room with a closet and bath, in the old Bijou Theater Building, 350 Main Street, Fairhaven. The apartments on that side of the building have very little natural light, but they do have windows on the stairway and/or the upper level. Photo by Beth David.

Mr. Barbosa says he believes they will be affordable housing, and he wants to market them to veterans.

Mr. Carmichael says they are nowhere close to adhering to building codes and could never be approved without completely reconstructing the spaces.

He said they were built illegally in the 1970s, not to code even then. Since the building has been empty for ten years, he said nothing is “grand­fathered” in.

Three other apartments on the Main Street side of the building are on one level and have big windows facing the Oxford School building. They each consist of a kitchen and one room.

The building also has three retail spaces with storefronts on Main Street, right across from the old Oxford School building, which is slated to have more than 50 apart­ments, with construction starting soon.

The Bijou building still has the large theater space, although all the seats are gone. Piping for gas heat sits on the floor now, but would be submerged when the floor is leveled out. It still has the steep pitch of a theater needing rows and rows of seats, facing the large screen area. Mr. Barbosa said he is considering that space for use as a function hall.

To use the Bijou building for apartments and retail, or “mixed use,” Mr. Barbosa needs a special 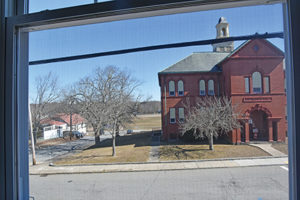 The front window of an apartment on the Main Street side in the old Bijou Theater Building in Fairhaven looks out to the Oxford School building and Livesey Park behind it. The new owner of the Bijou building, Julio Barbosa, is looking to renovate 15 studio apartments and three retail spaces. Photo by Beth David.

permit, which would be granted by the Planning Board. He has a public hearing appointment on April 13.

Mr. Carmichael provided the Neighb News with a letter he sent in response to Mr. Barbosa’s attorney. In the letter, Mr. Carmichael lays out the chronology of events leading to the stand-off. These included a couple of meetings with the planning director, fire chief, building commissioner, Mr. Barbosa and professionals he hired to work on the building design.

Mr. Barbosa said he figured the building would cost him about $400,000 to get completely renovated. And he had hoped to get the retail spaces rented quickly to help with expenses. But the changes the town wants will cost him at least $800,000 and probably more.

Mr. Carmichael said that the town needs to see detailed plans before he will issue any permits for any work on the building. He said town officials are in favor of having activity there.

“To date the building permit has still not been issued as several items do not comply with the current building code,” wrote Mr. Carmichael in the letter dated 2/5/21. “The Town would welcome the renovation of the Bijou Building with its additional residential units and Storefronts to help revitalize this square in North Fairhaven. The Planning Depart­ment has spent countless hours attempting to help Mr. Barbosa with this Special Permit and advising him of financing op­por­tu­nities avail­able from the State if he chose to go with low income housing (40B) and of other avenues.” 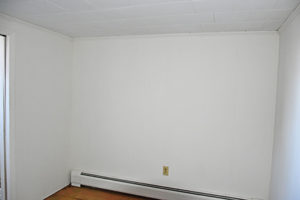 The bedroom on the upper level of one of the one-bedroom apartments in the old Bijou Theater Building, 350 Main Street, Fairhaven, has no window. The new owner, Julio Barbosa, is looking to renovate 15 apartments and three retail spaces. Photo by Beth David.

In a follow-up by phone, Mr. Carmichael said the apartments in question, as they are, will never be approved for people to live in. He ticked off a number of must-have items, in­clud­ing a sprinkler system, proper egress, an accessible way up to the second floor. And those do not address the problems with each individual apartment.

“He’s got a long way to go,” said Mr. Carmichael, but also said the town is in favor of the project. “We’re all for it. It’s an abandoned building. The way he’s done it is 100% wrong.”

“But it will need to be done properly or it won’t be allowed,” said Mr. Carmichael.

As of press time, he had not seen any detailed plans, but hoped they would be ready for the 4/13 meeting.

“I look foward to seeing his full set of plans,” said Mr. Carmichael, adding the he hoped they would be able to come to an agreement for a special permit.

As for his part, Mr. Barbosa knows he got into a project that was a bit more than he thought it would be. But as he walks around the old place, he marvels at the concrete block construc­tion, the gloriously spooky and large basement, and a host of other features of the old place. 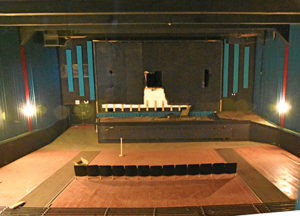 In a view from the projection room, the seats are gone from the theater space of the former Bijou Theater building, 350 Main Street, Fairhaven. The new owner, Julio Barbosa, wants to renovate 15 studio apartments and three retail spaces, and possibly rent the large room for functions. Photo by Beth David.

He pointed to the storefronts and then across the street to the old Oxford School building which will soon be bustling with new tenants.

There are so many choices to choose from for businesses to fill those spaces that would be mutually beneficial to the residents and to the merchants, he said.

He’s fighting the changes the town wants because “if you knock down one wall,” it changes everything and it all has to be to code.

But, according to Mr. Carmichael, it will all have to be to code, anyway.

They both agree it’s a building worth saving.

“We want to help him. We look forward to working with him,” said Mr. Carmichael. “We think it’s good for the town.”

“This is a beautiful, exciting build­ing, and I want to bring it back to life,” said Mr. Barbosa.

The Planning Board hearing is on 4/13. See page 20 for legal notice.