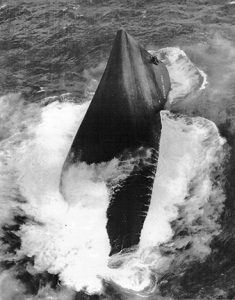 The oil tanker Fort Mercer sinks just after the last man escaped during a ferocious storm in February of 1952, the subject of the book “The Finest Hours: The True Story of the U.S. Coast Guard’s Most Daring Sea Rescue,” by Michael Tougias and Casey Sherman. United States Coast Guard photo.

New York Times bestselling author Michael Tougias will present a slide presentation on his book The Finest Hours: The True Story of the U.S. Coast Guard’s Most Daring Sea Rescue, on Monday, 9/26/22, at Fairhaven town hall, 40 Center Street. Doors open at 6 p.m. and presentation starts at 6:30.

The Disney Corporation has made a movie based on the book, and will star Chris Pine and Casey Affleck.

On February 18th, 1952 an astonishing maritime event began when a ferocious nor’easter split in half a 500-foot long oil tanker, the Pendleton, approximately one mile off the coast of Cape Cod, Massachusetts.

Incredibly, just twenty miles away, a second oil tanker, the Fort Mercer, also split in half. On both fractured tankers men were trapped on the severed bows and sterns, and all four sections were sinking in 60-foot seas.

Thus began a life and death drama of survival, heroism, and a series of tragic mistakes. Of the 84 seamen aboard the tankers, 70 would be rescued and 14 would lose their lives.

Michael Tougias, co-author of The Finest Hours, will use slides of the storm, the sinking tankers, the rescues, the victims, the survivors and the heroes to tell the story of this historic event. Tougias will describe the harrowing attempts to rescue the seamen, especially focusing on four young Coast Guardsmen who must overcome insurmountable odds to save the lives of 32 crewmen stranded aboard the stern of the Pendleton. 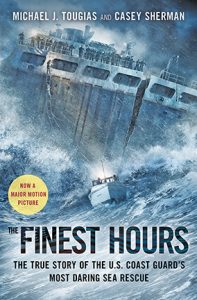 The cover of “The Finest Hours: The True Story of the U.S. Coast Guard’s Most Daring Sea Rescue,” by Michael Tougias and Casey Sherman. Submitted photo.

The author will also discuss the making of the movie, working with the screenwriters, and will share some humorous stories about the actors and his cameo in the movie.

Tougias has had two new books recently released. The first is a self-help book titled No Will Set You Free: Learn to Say No, Set Boundaries and Live a Fuller Life. The second book is a memoir titled The Waters Between Us: A Boy, A Father, Outdoor Misad­ventures and the Healing Power of Nature.

Michael Tougias is the author and coauthor of 30 books for adults and eight books for middle readers (age 8–14) in his True Rescue Series published by MacMillan. Visit www.michaeltougias.com for more information.