The Fairhaven Belonging Commit­tee talked about a variety of ways to engage with the community at its meeting on 9/16/22. The com­mit­tee also discussed a disturbing incident involving a Pride sign that was turned around at the Fairhaven Visitors Center.

The meeting was the first for Human Resources Director Cameron Durant as the staff liaison to the committee, and he took on a number of tasks to help the committee fulfill its mission to promote diversity, equity and inclusion.

The committee voted to write a letter asking the Select Board to set up a gift account for the BC so they can raise funds to buy items they will need for events educational outreach..

For instance, BC Vice Chair Jessica Fidalgo said she has a pop-up tent that would be perfect as a respite tent for seniors at different events. The commit­tee, however, should have its own, although she is willing to let them borrow hers until they get one.

Chairperson Kylie Bateman agreed it would be a simple way for the committee to connect and do more things in town.

The committee also voted to partici­pate in Kids Fest on October 8, an Office of Tourism event.

Ms. Fidalgo said the idea would be to have the tent as a relatively quiet space, “for any kid who just needs a minute away from the excitement.”

She also said she would like to have a changing table available for parents to use, and a chair for nursing mothers.

She said the idea is just to be a “little more accessible to families.”

Ms. Bateman noted that it was a good opportunity to reach out to the public: “People are still finding out we exist.”

The board will also create a flyer, and find literature from other organizations to have on hand for the event.

The committee also voted to pursue a cultural council grant to fund inter­generational events. Ms. Fidalgo said she planned to meet with the Council on Aging Director and the Superintendent of Schools. She recalled a program that brought middle school students to the senior center for an art project. Students and seniors created paintings and drawings and then held an art show.

“It was a really positive event,” said Ms. Fidalgo, adding she thought it was a good candidate for a cultural council grant to pay for supplies.

Socializing was missing during the pandemic, said Ms. Fidalgo, “And seniors thrive with little kids, and kids thrive with seniors.”

She said there are other opportu­ni­ties for the com­mit­tee to connect with people, such as helping the Veterans Services Office with the Veterans Day Parade, or the annual veterans lunch.

In another matter, Ms. Bateman suggested that the committee connect with the City of New Bedford Human Relations Council.

Ms. Fidalgo agreed, saying she attended one of their meetings and they had a “bigger range of discussions.”

She found their meeting “en­lightening,” she said, adding it was good to see that they are also working on the things the committee is talking about. A lot of the problems in New Bedford are the same problems in Fairhaven.

The committee also decided to ask  someone to make a presentation at their next meeting for Hispanic Heritage Month, which runs through 10/15.

The committee also briefly dis­cussed the town’s Personnel Policy to see if there is some language they want to comment on, or advocate to change. Mr. Durant said that he and the Town Administrator were going through the document and making changes. Mr. Durant said he would have something for them to look at for the next meeting.

The committee will also work on creating a year long calendar of the various recognition months and events that they may want to participate in. 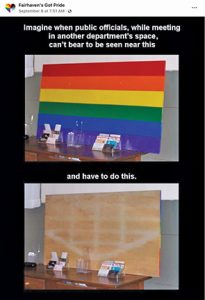 The committee also discussed, in a vague way, the Office of Tourism’s rainbow Pride sign that was turned around backwards after a town commit­tee met in the Visitors Center in the Academy Building. The BC did not name the committee but the Neighb News learned it was the Historical Commission, whose chair­per­son, Wayne Oliveira, is currently under a no-trespass order for town hall. The HC maintains the historical buildings in town, including the Academy.

Ms. Bateman said the rainbow is a “symbol of inclusion,” and emblematic of the values of the town and community.

It says, “Everyone is welcome,” said Ms. Batemen. “Literally in the welcome center of our town.”

Ms. Fidalgo said it may not have been intended as such a negative action, but, “If you go into someone’s space, you don’t touch something that’s not yours.”

Town Administrator Angie Lopes Ellison addressed the committee saying that when the values are not adhered to it reflects negatively on the community. She said the visitors center is set up for people to come to Fairhaven and may often be the first step a person makes into town.

Ms. Ellison offered her support to the committee to prevent something like it from happening again. She said she would address it at the next Select Board meeting, too.

Ms. Hahn called it a “childish prank,” and said people need to “grow up and get used to it.”

It does not matter why they did it, said Ms. Bateman, the result is to make others feel bad.

In a written statement to the Neighb News, Mr. Oliveira said he did not turn the sign around, it was that way when he went into the room. He also addressed a series of emails the Neighb News received from June when Mr. Oliveira told Mr. Richard to take down the same rainbow sign that was on a bench on the Main Street side of the building.

Ms. Ellison made it clear that the com­mis­sion is the steward of the building and has no say in operations of town offices. She wrote in her email to Mr. Oliveira that it was her decision to allow the sign and the Select Board’s “purview to make policy as it affects all municipal buildings.”

Mr. Oliveira said in his email to the NN “no group flags, banners or signs should be displayed at any of our historical buildings without permis­sion of the Commission.”

In his emails to Office of Tourism Director Christoper Richard, Mr. Oliveira said that Mr. Richard was pushing his “own personal agenda.”

Mr. Oliveira said in his email to the Neighb News that he felt the same way about the sign being inside the building, although he did not move it.

“It should not be on display in a government office,” he wrote to the Neighb News. “Especially during a taping of an official meeting with that sign in the background. I often scan the room to make sure nothing inappropriate is in the camera shot. (Its [sic] now September – As far as I am aware permissions were given for the month of June and not the entire year.)”

The Neighb News also contacted several members of the Historical Com­mis­sion. Select Board member Keith Silvia, who is the board’s representative on the HC, said he had no idea it had been turned around until later, when it came up for his board meeting. MJ Carvalho said she knew nothing about a sign at all. John Medeiros said he also had “no clue” who turned the sign around or that it had even been turned around at all.

Gary Lavalette, however, said that there was a discussion before the meeting and “we” decided that because there would be a “couple of older folks” at the meeting they might be “uncom­fortable with it.”

“So, basically, we just took it and turned it around,” said Mr. Lavalette, but when asked who he meant by “we” and if he personally turned the sign around, he said that he did not do it.

“I would say you probably want to talk to Wayne, he’s the chairperson,” said Mr. Lavalette.

He said the pride sign was okay for Pride month, in June, but not all year, and that it was a “personal agenda” to leave it in the visitors center.

Mr. Lavalette also apologized for not putting it back, since he was the last person to leave the room.

“I should’ve put it back where it was and the whole thing would’ve gone away,” he said.

Mr. Lavalette and Mr. Medeiros both said the time before the meeting was a little chaotic because Joe Figuerido was there to be recognized for his donation of the hitching post outside. He was also the first person to use the wheelchair ramp.

M. Lavalette said that when he walked back in the room the sign was turned around.

“I cannot tell you, honestly, who actually turned it,” said Mr. Lavalette. “I don’t know.”

He said they did not hide the sign, they only turned it around.

“There was no ill intent,” said Mr. Lavalette.

In a follow up phone interview, Ms. Ellison said the commission members “had no right or authority” to move the sign or turn it around.

“If indeed it was something that hap­pened while a board that is appointed by the Select Board had control of the building, then we need to look at who we appoint to those boards,” said Ms. Ellison. “They should uphold the same values that the Select Board holds and the commu­nity holds. And if they do not hold those values, then they should not be repre­senting the Select Board in their appointments.”

“The sign is intended to show support and to give a friendly welcome to a number of our town residents and visitors,” said Mr. Richard in a written statement. “It is six bright colors painted on a sheet of quarter-inch plywood. It can’t hurt you.” 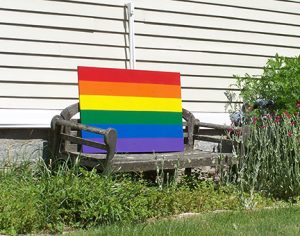 The plywood Pride Sign is displayed in front of the Fairhaven Visitors Center in June of 2021 and is now at the center of a controversy in September of 2022. Photo courtesy of the Fairhaven Office of Tourism.