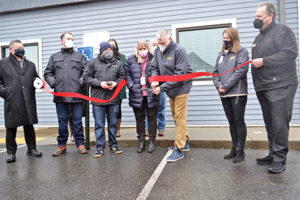 This is a dream come true, said Chapman “Chappy” Dickerson, CEO of Bask, on Friday, 2/19, the first day of adult-use cannabis sales inside Fairhaven’s only marijuana dispensary.

Bask team members, colleagues from One Southcoast Chamber of Commerce, and an eager crowd of 21-and-over gathered in front on 2 Pequod Road that snowy afternoon for a traditional ribbon-cutting ceremony and an early peek inside the new 2,000 square-foot adult-use cannabis shop ahead of the official opening the next morning.

“This has been a long journey,” said Mr. Dickerson, scissors in hand, standing behind a shiny red ribbon before a crowd of about 40 in face masks.

Some time has passed since Sep­tem­ber of 2012 when Mr. Dickerson, business partner and Bask President Tim Keogh, and the Bask team began the licensing process to sell medical cannabis to card-carrying patients.

“And here we are eight years later opening up for recreational,” said Mr. Dickerson.

Three years ago*, Bask opened as Fairhaven’s first and only medical cannabis dispensary and later moved its cultivation operation to Freetown to make way for the separate adult-use counter. The operation is now up to 69 employees and grown from a 2,000 square-foot medical marijuana dis­pen­sary to 4,000 square feet split into sections: one for medical and the other recreational.

“This is a big deal, and we’re excited,” said Mr. Keough. 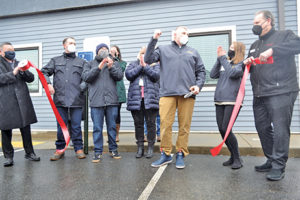 Front Row L-R:  Albert Mui  from One Southcoast chamber of commerce; Bask President Tim Keogh; Ian Abreu of One Southcoast; Bask Director JoAnne Leppanen; Bask CEO Chapman Dickerson (with scissors); Bask Board Member Melanie Dixon; and Tom Menchi of One Southcoast clap and give high fives to the sky after the official ribbon is cut to commemorate the opening of Bask’s recreational marijuana dispensary in Fairhaven on 2/19/21. Photo by Jean Perry

He passed the microphone to Bask Director JoAnne Leppanen, who told the crowd, “I knew these guys years ago when they were operating a co-op in Rhode Island. So, to be here now and to see all of you and to be standing in front of a dispensary … now opening for adult-use is sort of an out-of-body experience, actually. I never imagined it would actually happen.”

Ms. Leppanen said one thing those at Bask have witnessed over the past year is how often someone rings the medical-use dispensary door buzzer but cannot enter because they don’t have a state-issued medical marijuana card.

Mr. Chapman cut the ribbon, gave a few fist pumps toward the sky, and then walked a man older than him toward the entrance. The two paused for a moment to take in the experi­ence. Their smiles were hidden behind face masks, but their similar-looking sets of eyes hinted that there was a story behind the story making headlines in Fairhaven that day.

Mr. Dickerson said the man with him was “a big part of my dream and my goal.” That man beside him was his father, Bob Dickerson.

“When I grew up, my dad went to prison for a drug-related crime when I was seven years old and got out when I was 18,” Mr. Dickerson said. “So, this is super important to me. I have a nine-year-old son, and he doesn’t ever have to experience collect calls or writing letters or anything like that. I appreciate everything my old man has taught me, and nobody should go to jail for drug crimes. That’s just the way it is.” 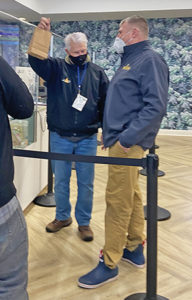 Mr. Dickerson then ushered his dad to the front of the line so he could be the first legal adult-use cannabis customer of his son’s brand-new recrea­tional dispensary.

“Congratulations, son; I’m so proud of you with,” the older Mr. Dickerson said as he hugged his son and then asked him what he would recommend from the selection.

“We’re selling legal weed, and nobody has to go to jail,” said the older Mr. Dickerson. He made his purchase and then raised his paper bag of legal goodies in celebration.

He had driven for hours from his home in Delaware to Fairhaven, through the snow, a real white-knuckle drive, he admitted.

“I’m so proud of everything that he’s accomplished,” said Mr. Dickin­son, the elder. “I wouldn’t have missed this for the world.”

This is just Phase 1 of the adult-use dispensary opening schedule amidst the COVID-19 pandemic. Sales are restricted to online order-ahead pickup until Phase 2,* when customers can purchase at the dispensary counter. Bask is open seven days a week from 10 a.m.–6 p.m. and eventually will switch to 9 a.m.–9 p.m.

*Fixes errors from previous versions: three years, not one; counter walk-in service begins with phase 2 (not 4), and began on 2/25/21.