Thanks to donations in memory of Michael Robinson (NeighbNews 1/17/19), the Fairhaven Animal Shelter has a couple of news features that are helping animals and people.

A new ramp connecting the main shelter building to the garage, where the food is stored, makes it possible for people in wheelchairs and others who cannot do stairs to get from one place to the next. 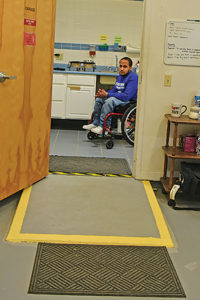 Mario Arteaga, 21, volunteers at the Fairhaven Animal Shelter, but was unable to access the garage, where the food is stored until this ramp was installed with money from the gift account donated in memory of Michael Robinson. Photo by Beth David.

Mario Arteaga, 21, who is wheelchair bound and volunteers at the shelter, is especially happy about the ramp. Now he can go to the storage part of the building and get the food and other supplies stored there without having to ask for help.

Animal Control Officer Terry Cripps said that Mr. Arteaga does everything the other volunteers do, but he was unable to grab the food from storage himself, until now.

“The biggest obstacle was the step,” said Mr. Cripps.

Mr. Arteaga said he just likes working with animals and is actively looking for a job in the field. The ramp means he does not have to ask for help to feed the animals. He volunteers for two full days a week.

He has worked with dogs, cats, rabbits, and a variety of birds since volunteering at the shelter starting last June.

“I love dogs and cats equally,” said Mr. Arteaga. “And hanging out with the animals….not so much the cleaning.”

“This [the step] was the only thing preventing him from doing what the rest of us, do,” said Mr. Cripps. “Now I really put him to work.”

The ramp also makes it possible for the public to easily get to the garage, where there are also some cat cages. At open houses and other events, wheelchair users would have to go to the front door to and go around the building from the outside to access the garage.

The donations were also used to buy a new bathtub for the animals. The plastic tub was really in need of replacement, and they found a lot of rot in the wood behind it, said Mr. Cripps. The new stainless steel tub has a plastic bottom to catch the fur, and a wider drain to keep it from clogging. 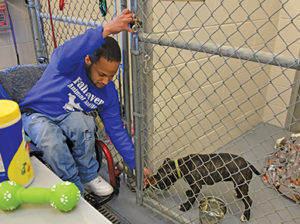 Mario Arteaga, 21, feeds a puppy at the Fairhaven Animal Shelter where he volunteers. Photo by Beth David.

Outside the large exercise yard got some new fencing so there are now three exercise yards. Before, only one dog could be exercised at a time.

In the spring, the cement will be extended so that wheelchair users will be able to get around the exercise yards. Right now, it’s okay for Mr. Arteaga, said Mr. Cripps, because the ground is frozen.

Mr. Arteaga, who hopes to have a job by then, said he will still volunteer at the shelter, though.

“I’ll come on my days off,” he said. “Because I like being here that much. So I don’t want to stop coming.” 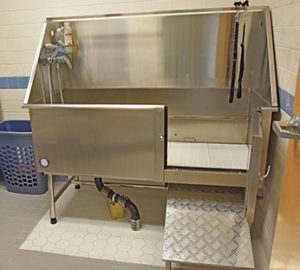 This stainless steel bathtub was installed at the Fairhaven Animal Shelter using funds from the gift account that were donated in memory of Michael Robinson. Photo by Beth David.