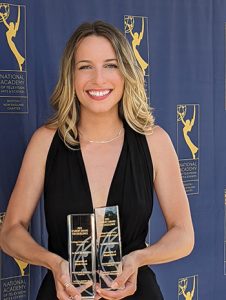 Alyssa Botelho of Fairhaven holds her two Student Emmys” from the National Academy of Television Arts & Sciences Boston/New England Chapter that she won for her short film “To Dust All Return” on 6/14/22, at the Maynard Fine Arts Theatre. Submitted photo.

The National Academy of Televi­sion Arts & Sciences Boston/New England Chapter recently honored Alyssa Botelho with two College/ University Production Awards (com­monly known as “Student Emmys”). NATAS, which governs the Emmy Awards and is a leading professional organization in the television and media industry, named her short film To Dust All Return as “Best Short Form — Fiction” and she was named “Best Director”.

Alyssa is the first Fairhaven High School alum and the first University of Rhode Island student to win a College/ University Production Award from NATAS.

The 18th century historical thriller tells the story of a girl who is suspected of practicing witchcraft. It was made during the pandemic in the spring of 2021 for her capstone film class at the University of Rhode Island.

Alyssa says, “It’s truly an honor to be recognized by this prestigious organization. I don’t make films for the purpose of winning awards, but I do feel proud to represent the Fairhaven High School Media Program as an alum for the first time on this level and against many Ivy League schools. I’m especially excited this win was with To Dust All Return, as it was a project that, for the first time in eight years of developing my craft as a filmmaker, I felt my artistic voice came through loud and clear. This is only the beginning of my journey as a filmmaker, and I’m excited to continue creating unique stories that spark conversation and make people feel something.”

Each year, students from colleges and universities across New England submit entries. These entries are judged by the Regional Chapter’s broadcast professionals. Awards are presented to entrants who exhibit outstanding achievements. Being one of the most competitive categories, the “Best Short Form — Fiction” is judged by content creativity, execution, well-organized material, and strong narrative content.

The film will be posted on Alyssa’s YouTube Channel this October after completing its film festival run. To date, it has screened at the University of Rhode Island, the Fairhaven Town Hall, the Massachusetts Independent Film Festival, and the Shawna Shea Film Festival where it won “Best Folk Horror Short”. 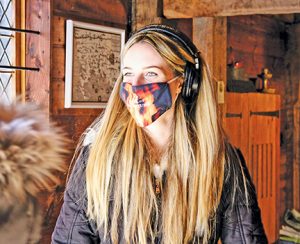 Fairhaven native and resident Alyssa Botelho on the set of “To Dust All Return,” a short film she wrote and directed that won several awards, including two “Student Emmys” from the National Academy of Television Arts & Sciences Boston/New England Chapter. Submitted photo by Nick Doyle.

The National Academy of Televi­sion Arts & Sciences (NATAS) is a service organization dedicated to the advancement of the arts and sciences of television and the promotion of creative leadership for artistic, educational, and technical achieve­ments within the television industry. It recognizes excellence in television with the coveted Emmy® Awards for News & Documentary, Sports, and Daytime television programming, as well as achievements in television Technology & Engineering. NATAS membership consists of more than 18,000 broadcast and media pro­fessionals represented in 19 regional chapters across the United States Beyond awards, NATAS provides extensive educational programs through its Foundation, including regional and national scholarships and Student Production Awards.