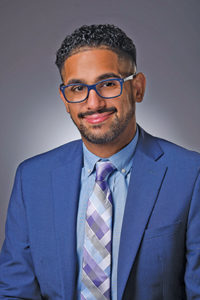 Tomas Otero has joined Alltrust Credit Union as a Branch Manager in our New Bedford branch. Otero has over 9 years of retail banking experience. His most recent role was as a Financial Center Manager at Bank of America. Otero enjoys interacting with different people every day and hearing their stories. He loves making a difference in individuals’ lives whether it be putting a smile on their face or helping them reach their short- or long-term financial goals.

“Tomas’s dedication to the com­mu­nity and helping others, whether it be in a banking setting or on a personal journey makes him a great fit here at Alltrust” stated Carmen Sylvester, President and Chief Executive Officer. “He strives to create a positive experience with all members he interacts with, no matter the situation.”

Otero is very active within the community. In 2020, he was diagnosed with Type 2 diabetes, and he used his diagnosis as motivation and lost 125 pounds. He now helps others in the same situation by acting as an accountability buddy through their weight loss journey. He is also involved with his children’s baseball team and dance studio.

He is originally from West Haven Connecticut and moved to New Bedford in 2008. He has been happily married to his wife, Ana, for 10 years and is the proud father of his 6 beautiful children, Annie, Izzy, Willie, Charlie, Teddy, and Benny.

Established in 1922, Alltrust Credit Union (formerly known as Southern Mass Credit Union) is celebrating 99 years of service excellence and financially sound operations. The credit union has assets of over $300 million and provides banking services to more than 14,000 members. The main office is in Fairhaven, Massachu­setts, with branch offices in Fall River and New Bedford, Massachusetts. Follow Alltrust on Facebook, Twitter, Instagram, and LinkedIn. For more information, call 508.994.9971 or visit alltrustcu.org.