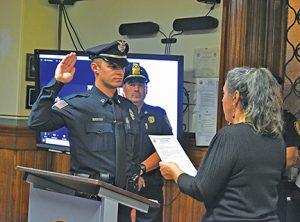 Alex Silva is sworn in as a Fairhaven Police Officer by town clerk Linda Fredette at the Select Board meeting on 7/18/22, while Lt. David Sobral looks on. Photo by Beth David.

Fairhaven Town Clerk Linda Fredette gave the oath of office to Alexander Silva at the Select Board meeting on 7/18/22, making him the town’s newest police officer.

Mr. Silva, 26, is a lifelong Fairhaven resident with a Bachelor’s Degree in Criminal Justice from Bridgewater State University. He has most recently worked as a civilian dispatcher with Fairhaven PD. He graduated from the Cape Cod police academy on 7/15/22.

SB member Bob Espindola said that Mr. Silva and another recent recruit were both classmates of his children, and it was nice to see their development and have home grown officers.

“I’ve known Alex his whole life,” said SB member Charles Murphy, including, he said, when he was on the dunk tank. “And he shot at me with a water pistol. Now he has a real gun.”

“Congratulations, Alex,” Mr. Murphy continued after the laughte subsided. “You worked really hard your whole life to do this. I am so honored you are a Fairhaven police officer.”

Off. Silva’s little brother Maxwell Hurley, 7, was also clearly happy and proud of his big brother.

“It’s so cool,” said Max. “Because he can drive the police car and all that.”

As for Off. Silva, he said he was “relieved.”

“It’s been a long time coming,” said Off. Silva, who has always wanted to be a police officer.

He said working in the town where he grew up, still lives, and knows lot of people, such as Mr. Murphy, who have known him his whole life, is a good thing.

“This is better than if I went anywhere else,” he said.

His mother, RaeAnn Hurley, said she was proud and nervous. She said Alex worked hard and had been dedciated.

She wrote to the Neighb News later, saying she was so overwhelmed with emotion that it was hard for her to sum up how she felt about her son’s accomplishments. 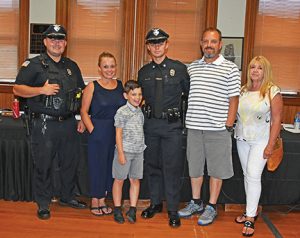 “I’ve had the honor to watch my son transform from citizen to police officer,” she wrote later that night. “I’m so proud of who he is as a person and a police officer. I know he will serve and protect our town with honor and pride! I wish for him a rewarding, successful, and safe career!”

“I”m happy for him and his accomplishment, and proud,” said Mr. Hurley. “He worked very hard.”

But he added, “he made it look easy.”

Police Chief Michael Myers noted that they knew what they were getting with Mr. Silva because he had been dispatcher with the department, and he was very confident in him.

Lt. Kevin Kobza, who is respon­sible for shepherding recruits through the process and the academy (this is his 22 recruit), said Alex made it “look easy.”

He was well organized, and kept the department informed of his progress at the academy.

“I’m just happy to have him on board,” said Lt. Kobza. “And I’m looking forward to watching him develop in his career.”

Mr. Silva also has two sisters and a brother-in-law out of state that a extremely proud of all his accomplish­ments. noted his mother: Madisyn Silva, Dr. Alex Borges & Allysha Borges