Nancy Francis of Acushnet was honored on June 18 by the Massachu­setts Commission on the Status of Women as a member of the 2019 class of Unsung Heroines. Representative Chris Hendricks (11th Bristol District) recommended Ms. Francis for this recognition because of her unwavering dedication to the Acushnet Community Center and years of library volunteer work. Ms. Francis was honored with 130 other Unsung Heroines for her outstanding contributions in at an event held at the State House in Boston. 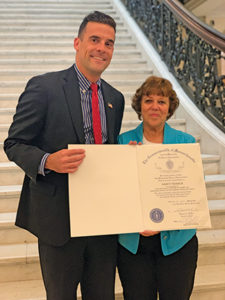 Mass. state Rep. Chris Hendricks (11th Bristol District) and Acushnet resident Nancy Francis show the citation she received as an “unsung heo” from the Massachusetts Commission on the Status of Women at the statehouse on 6/18/19. Submitted photo.

Nancy Francis was a founding organizer of Acushnet Community Services in 1992. She spent countless hours working to launch the Commu­nity Center in the former Marie S. Howard School. By 1997, the doors opened and the Center continued operating until 2013.

Over the years, Ms. Francis served as Director, Treasurer, and Dance coordinator, among other functions, all the while working full time as a high school math teacher. When the location became the Acushnet Public Library in 2015, Ms. Francis joined the Friends of the Library before being elected to serve as a Library Trustee. She continues in that role as well as providing tutoring services.

“It was a privilege to nominate Nancy for this award. She immedi­ately came to mind when I began to think of women in our community who have given so much of them­selves for the betterment of our commu­nity,” said Rep. Hendricks before presenting Ms. Francis with a Citation commending her work.

During the event, the Commission described Unsung Heroines as women who don’t make the news, but make the difference. They are the women who use their time, talent and enthusiasm to enrich the lives of others and make a difference in their neighborhoods, cities and towns. They are mentors, volunteers and innovators who do what needs to be done without expectations of recog­nition or gratitude. These women are the glue that keeps a community together and every community is better because of their contribution.

The ceremony included a program emceed by MCSW Chair Nina Kimball, acknowledging each of the 2019 Unsung Heroines, along with remarks from Lieutenant Governor Karyn Polito, Speaker of the House Robert A. DeLeo, Senate President Harriette L. Chandler and Representative Colleen M. Garry, Co-Chair of the Mass. Caucus of Women Legislators.