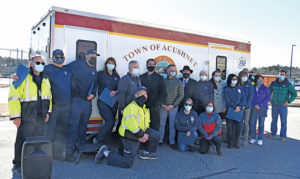 Acushnet town officials, state Rep. Christopher Hendricks (D)/11th Bristol, employees, and recipients of official citations of appreciation pose in front of the newly painted trailer used for COVID-19 testing at a ceremony of inauguration and apprecation on the school grounds on 3/6/21. Photo by Beth David.

Acushnet’s new testing trailer has a new look. The town has been using the COVID-19 Mobile Unit for weeks, while it still had the markings of the University of Rhode Island. Now it is undisputably Acushnet’s, sporting new graphics, including a mask over the town seal.

Town officials, joined by state Rep. Christopher Hendricks (D), 11th Bristol, town employees, and volun­teers, held an inauguration ceremony on Saturday, 3/6/21, in frigid tempera­tures on the school grounds. They used the occasion to hand out 25 citations to individuals who have volunteered to help with weekly testing of Acushnet residents and school staff.

The citations extend the Select­board’s “Thankfulness” in recognition for “selfless dedication and commit­ment to the Town of Acushnet and its residents during the COVID 19 pandemic. Your efforts kept our residents safe and for that we are most grateful! We commend you for your hard work.”

Fire chief Kevin Gallagher led the group of about 30 people in a moment of silence for those who have died from the virus.

He told the crowd that the mobile unit has been true benefit to the community as they work their way out of the crisis. It has made it possible to go to different sites for testing, reaching more people, includ­ing town em­ployees and school staff. The town has adminis­tered a total of 9,073 tests since Septem­ber, in­clud­ing PCR, anti­body, and rapid tests, a “truly a remarka­ble feat,” said Chief Gallagher, since the town has about 10,000 residents.

One more thing: “This has been kind of fun.”

The volun­teers have gotten to know their fellow residents, many who return every week to be tested. 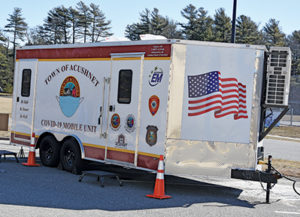 Acushnet’s COVID-19 testing trailer sports new graphics, including a mask over the town seal as it awaits being the star attraction at a ceremony of inauguration on the school grounds on 3/6/21. The town hopes to use the mobile unit for vaccinations if it can get approval from state and federal officials. Photo by Beth David.

Selectboard chairperson Kevin Gaspar said the effort by the fire department, other town depart­ments, and volunteers has been extraordinary.

“Thank you all for protecting this community,” he said. “It’s nice to be a small town where everybody comes together.”

Selectboard member David Desroches touted “Team Acushnet” and noted that during the summer the Council on Aging handed out food to more than 200 families.

Selectboard member David Wojnar said the best part of the job was being able to say “thank you.”

He noted the different departments that supported the effort, saying it was a “all hands on deck approach.”

Officials handed out citations to 25 people, including Chief Gallagher, who, pre­suma­bly did not know he was also a recipient.

When he got to Heather Sylvia, the director of the Council on Aging, Chief Gallag­her said she has built the COA/Senior Center into the “gem that it is.”

He said he was going to call her the “mom” of Acushnet, but decided it was better to call her its big sister. 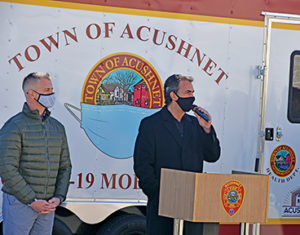 Acushnet Selectboard chairperson Kevin Gaspar speaks at a ceremony of inauguration for the newly painted COVID testing trailer on the school grounds on 3/6/21, while Selectboard member David Wojnar listens. Photo by Beth David.

Superintendent of Schools Paula J. Bailey expressed her “sincere appreciation” for the support to the schools, which includes weekly testing of staff. It gives teachers peace of mind, she said.

“And when teachers feel good, it trickles down to our students,” said Dr. Bailey.

She said she was happy to see light at the end of the tunnel, as some students were scheduled to go back into the classroom four days starting next week, then full time next month, and credited the support of the community for that.

Chief Gallagher introduced Rep. Hendricks, calling him a “true champion,” and saying he “gets it,” and helped with everything the town asked for.

Mr. Hendricks said for Acushnet to get the infrastructure in place was remarkable. He noted the difference between towns and cities.

“You can get things done in towns,” he said. “This is a great example of the town and the chief doing so much with so little…in a hell on earth pandemic.”

He said the focus on Beacon Hill has been to prioritize people for  receiving vaccines, including teachers. When they do become available for local municipalities to administer them, he will “fight tooth and nail” to make sure Acushnet gets some doses, since they have the infrastructure in place. 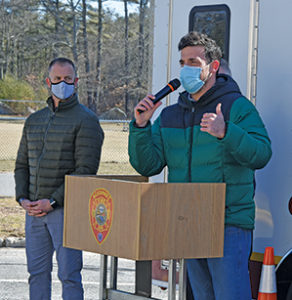 “I’m so impressed with everything that’s going on here in Acushnet. I just wanted to thank you from the bottom of my heart,” said Rep. Hendricks, and for the people of the 11th Bristol District.

Chief Gallagher closed out the ceremony reading a note from a resident thanking them and saying not to give up.

“We’re not going to give up. We would not give up on anybody in this town,” said Chief Gallagher and added that the fight to get vaccines was next.

To see the ceremony visit https://www.youtube.com/watch?v=XnPBQMOzMSk