Acushnet Town Meeting passed the town’s $32.5 million operating budget, capital spending articles, and other spending articles, along with a couple of bylaw changes at the annual TM on Monday, 5/13/19 in about 2 1/2 hours. Most of the 38 articles passed with little or no discussion, and most passed unani­mously, but a few saw some debate.

The one that got discussed the longest, by far, was a bylaw change to create a permitting avenue for containers.

Surprisingly little discussion was held, however, on an article that changed the day and date of the annual town election, which will now be on a Saturday. The new bylaw also sets the Annual Town Meeting to be held on the second Monday in May of each year (“or at such other time as shall be determined by vote of the Town”), and the annual election of town officers to be held the first Saturday following the annual TM.

Town Clerk Pamela Labonte told Town Meeting that having the local election on a Saturday would avoid any conflicts with the school, as voting is held at the elementary school. Having the election after TM would also mean that a new selectboard member would not be trying to catch up and vote on a budget he or she was not familiar with. She also said that a Saturday vote might increase voter participation.

Ms. Labonte also noted that in 2020 there will be presidential primaries within 30 days of the local election.

Local elections must, by state law, be held from February to June, so they cannot be held at the same time as state or national elections. That would also require two ballots and a second set of voting machines, anyway, so that would not be a good alternative.

In the end, the vote, which required 2/3 to change a bylaw, passed with a show of hands.

TM also passed a bylaw allowing the town to require all abandoned and foreclosed properties to be registered with the town.

It will allow the town to make sure the properties are not neglected, said Building Inspector James Marot. He said he has to spend a lot of time just finding owners, properties have had burst pipes, have vandalism problems, and are eyesores in the neighborhood. If the town has a registry, it will be able to force owners to keep the properties maintained.

“Surprisingly enough, we have quite a few of them,” said Mr. Marot.

He said a lot of communities are adopting the same kinds of measures to combat the problem.

The article passed with only one opposed.

TM also passed a zoning bylaws change that clarified some sections of Article VIII of the bylaws. The changes, however, were not the pieces that got the discussion. A provision about how far driveways can be constructed near structures drew criticism from David Davignon.

Planning Director Henry Young, however, explained that the provision in question had been on the books for years.

Mr. Davignon withdrew his motion to amend, but noted that the bylaw really does need to be changed.

The article passed with the required 2/3 votes.

TM also passed a bylaw, after a very lengthy discussion, that would require a permit for temporary storage containers, trailer boxes, etc. The bylaw sets up a temporary, one year license, and also requires a permit and site plan for all permanently purchased containers.

Mr. Marot told TM that there are a lot of containers on properties throughout town, and they are all not allowed.

He said the new bylaw would allow the containers, but would also give the town and the neighbors some control over where they could go, and make sure they are properly main­tained. Mr. Marot said people are using the containers to get around the permitting process for sheds.

He said the containers can, indeed, be made into sheds and can be treated that way, but they would need to go through the permitting process, with a site plan, variances if necessary, etc.

Now, he said, the containers are used as temporary, moveable structures, even though they stay in the same place all the time, to skirt the bylaws. The new bylaw will allow the containers, but will require them to follow the same rules as sheds and other out buildings. 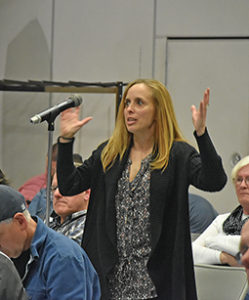 Stephanie St. Onge speaks against a bylaw change that would require permits for storage containers and box trailers in town at Acushnet Town Meeting on 5/13/19. The measure passed. Photo by Beth David.

Stephanie St. Onge objected to the bylaw, saying that many of the larger containers have been on farms and used to store grain and  farm equipment. She said she would like to have a provision to exempt, or “grandfather” in some of them.

A lengthy discussion ensued, including amendments, and a ruling by Town Counsel that there was no way to word the exceptions legally, based on what Ms. St. Onge was specifying.

Debra Medeiros said she was worried that someone who had a container on a property for 20 years would get denied a permit.

Mr. Marot said that once a site plan was approved and the permit granted, then the container would be legal.

But now, without the permit, “It’s there illegally,” said Mr. Marot.

The Selectboard would be the entity that approves the permits and site plans, said Mr. Marot.

The point is to get rid of the containers and boxes that are supposed to be temporary and are placed on properties to the “detriment of the town,” he said.

A vote to table the article failed, and discussion continued.

Selectboard member Roger Cabral spoke in favor of the change, saying that it would give the building inspector the tools he needs to regulate the containers

“This is not to harass you,” said Mr. Cabral. “It’s not government out to get you.”

Selectboard member Kevin Gaspar also supported the article, saying it would require the containers to adhere to the same setback requirements as other buildings,

“Temporary is one thing,” said Mr. Gaspar. “But permanently? Think about that.”

Mr. Marot said the purpose was to make them legal.

“Right now, they are all illegal,” he said, adding that if it did not pass, then he would still go after them as complaints get called into his office.

Mr. Davignon said he was not opposed to the bylaw, but said he felt there should be a way to grandfather in those that have been in place for decades.

In the end, TM passed the bylaw as written, with the required 2/3 votes. 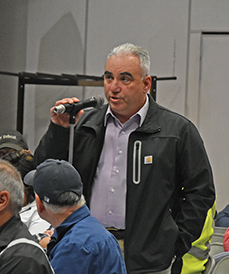 A change to the use of Civil Service for the fire and police depart­ments passed with some discussion. Call Firefighter Eric Arruda spoke in favor of the measure, saying that the law is “antiquated.” With the rules the way they are, he said, call firefighters who have been with the town for years are not allowed to move up.

Spending articles, including the operating budget, received minimal discussion, although Police Chief Michael Alves did have to explain why he needed $50,000 from free cash for mobile computers in the police cruisers, and why new speed limit signs cost $7,500.

David Calheta said some expenses in Article 12, for capital expenses, such as $10,000 for a copy machine were “excessive” and called the $50,000 for mobile computers “outrageous.”

Chief Alves said the copy machine was also a computer. As for the mobile computers for the cruisers, the fleet is changing from gas powered vehicles to electric, so eight cruisers need to be refitted this year.

The $7,500 for speed limit signs is for 75 signs in the “center village.” He said the signs have to be placed at certain intervals in order for the citations to be legal. The money is for signs, posts, and installation.

Mr. Cabral emphasized to Town Meeting that all capital expenditures had been discussed individually by both the Finance Committee and the Selectboard before being placed on the warrant.

Superintendent Paula Bailey said the district had not adopted a new curriculum in years.

Teacher Rebecca Ashley said there were leaks inside the school.

All TM documents are available on the town’s website at https://www.acushnet. ma.us/town-meeting