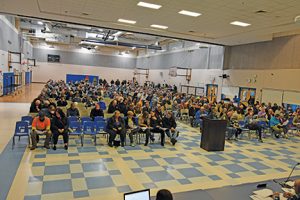 The Ford Middle School in Acushnet has full house for Acushnet’s annual Town Meeting on 5/9/22, more than 500 voters attending to vote on the town’s budget, bylaws changes, and other items. Photo by Beth David.

In two votes that were not the least bit close, Acushnet Town Meeting voted to pass a moratorium on large scale solar installations and, in a separate vote, did not adopt a soil bylaw change ­designed to regulate activities at PJ Keating.

More than 560 voters attended to vote on 27 articles and a $33.2 million operating budget, a far cry from just a few years ago when town officials struggled to reach the 75 quorum.

The increased interest was clearly due to a citizens petition to amend the Soil Conservation bylaw. The amendments would have made it more difficult for PJ Keating to continue operating as it is. Several protesters stood outside before the meeting with signs reading: “Laborers for working families,” in support of PJK’s operations in town.

Former Selectboard and BPW member Garry Rawcliffe provided a bit of Town Meeting theatrics, com­menting by far on the most articles. His penchant for yelling out from his seat provided chuckles from TM attendees, but not so many chuckles from the officials on the stage.

In a bit of unexpected drama, Select­board member Kevin Gaspar made a snide comment about Fire Chief Kevin Gallagher’s retirement and payout.

The article was to transfer $10,000 to “miscellaneous.” Mr. Rawcliffe asked for more details on the explana­tion. Interim Town Administrator Jamie Kelley explained that the money was for compensated absences, such as retirement. 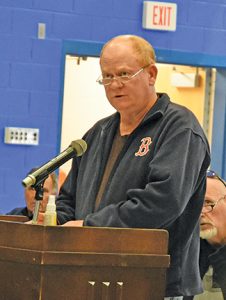 Mr. Rawcliffe noted that an earlier item had put $150,000 in the reserve fund for compensated absences. He said they should be using that item and note adding “miscellaneous” because it will never disappear or go down.

Mr. Gaspar agreed that the reserve fund could have been used for that, then cracked: “The chief’s retirement is going to cost you more than that, and his buyout and vacation.”

Everyone knew Chief Gallagher was retiring and it would be his last town meeting. Moderator Les Dakin sang the praises of the chief and his 35+ years with the town, 19 as chief. Mr. Gallagher got a long round of applause.

Chief Gallagher had originally said he would resign in September, but decided to resign on July 8. He told TM that his twins were going off to college and he wanted to spend the summer with them, so he left a couple of months early.

After Mr. Gaspar’s remark, Chief Gallagher made his way to the floor mike and addressed the notion that somehow he was trying to “screw the town.”

He said he had a contract that the Select Board members signed. The contract says that at separation, he is entitled to whatever unused vacation time exists. He also explained that it takes three months for the first pension check to arrive. Every municipal employee in Bristol County has to figure out how to bridge that gap, he said.

“Apparently it was okay for me to leave in September and cash out my vacation,” said the Chief, but for some reason it would not be okay in July.

He said the Interim TA told him about the discussion to try to get him  to leave before the end of the fiscal year. Mr. Kelley assured TM that he told Chief Gallagher that his contract would be honored. 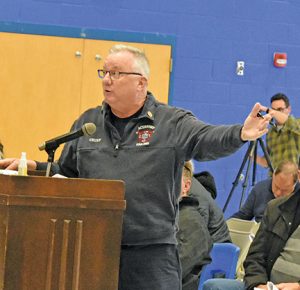 Acushnet Fire Chief Kevin Gallagher gives a spirited response to a comment Selectboard member Kevin Gaspar made about the chief’s retirement at the annual town meeting at Ford Middle School on 5/9/22. Photo by Beth David.

Mr. Gallagher said if they did not want that provision in his contract, they had 19 years to change it.

“And say, y’know Gallagher, we don’t want you to work eight days into the fiscal year and then cash out like every other cop, firefighter, public works employee does to take care of their families,” he said. “Somehow, I’m being singled out. I don’t appreciate it. I don’t like the reference that somehow I’m putting a gun to your back and holding you up.”

He said he would talk to anyone about, who wanted to. The rumors are flying, he said.

Maybe they should ask the Interim TA if any conversations happened, “about getting rid of me before the end of the fiscal year so they would’ve have to pay out the 10 thousand dollars in unused vacation” said the Chief.

He then said something about the applause he received earlier, but his comment got drowned out by new applause.

He said he worked along side town employees he had nothing but respect for and whom he loved.

He then left the floor mike and went back to his seat.

Mr. Kelley then spoke, saying to the chief directly that he assured him his contract was valid.

“I appreciate that. I respect you for that,” said Chief Gallagher. “But you also told me the comment about getting rid of me before the end of the fiscal year was also mentioned. I told you that should not even have been discussed in the town administrator’s office. I’m, I’m heartbroken by that.”

Mr. Kelley said he told the chief that so he would know what was going on and to assure him that his contract was valid and he would get his buyout.

Mr. Rawcliffe provided a bit of comic relief, saying, “It was not my objective to get this thing going, here. I just wanted to know where that ten grand was being spent.”

Mr. Dakin then moved to a vote, asking if there was any more discussion.

Someone hollered out from the crowd, “We love you, Chief,” and the room erupted into another lengthy applause.

The motion did pass. 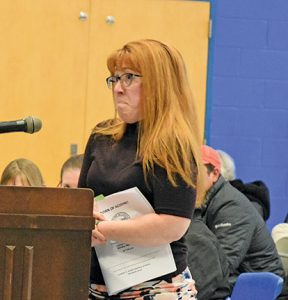 After the meeting, Mr. Kelley, the Interim TA, told the Neighb News that Mr. Gallagher’s contract was valid and he assured Mr. Gallagher that it would be honored.

Town meeting also voted to place a moratorium on large scale solar installations. The town has seen a rapid proliferation of the installa­tions, and town officials fear they are changing the rural character of the town.

Initially, the idea was to give landowners an option to keep their land and keep it open instead of developing it. But too many installa­tions are changing the landscape.

The six-month moratorium would give the town a chance to put regulations in place. It would not stop any projects already being built.

Several residents spoke about the problems they have encountered with existing installations and planned ones, including access roads.

Selectboard member Kevin Gaspar got a little applause after someone asked if the town or residents received any benefit from solar installations, such as reduced electric bills.

“Not thus far,” said Mr. Gaspar. It’s only for the developer to make money.”

Selectboard Chairperson David Desroches noted that the town does receive tax money from the installa­tions. That money, he said, has gone into the capital fund and is being used for a new roof for the school.

“I see that as a benefit,” said Mr. Desroches.

Selectboard member David Wojnar said it the beginning it was to keep old farm land open and not developed for housing.

In the end TM voted by the required 2/3 to impose the moratorium.

Article 25, that would have changed zoning for some parcels at the end of Nelson Avenue and Pembroke Avenue, including an old junkyard, was indefinitely postponed.

The article reads that changing from Residential A zoning to Resi­dential Village would create an additional 10-13 conforming lots.

Many neighbors spoke against the project, citing the increased traffic.

“Think safety, not dollars,” said Dianne Abrams, saying there are many children in the neighborhood.

Neighbors implored town officials to at least look at the neighborhood.

Town Planner Doug Pimentel said there were many benefits to the plan, including that the contaminated junkyard property would get cleaned up. 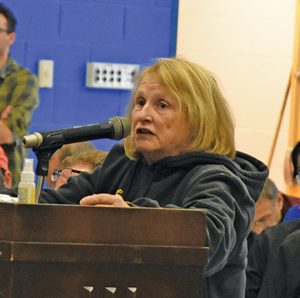 Ms. Abrams said she was not against building a few houses there, but 10 is too many.”

Paul Trahan, who said his grands­ons were involved in the project, told TM that the project only called for a few houses.’

But Chery Hall also pointed out that it is in writing in the article that 10-13 lots would be created.

In the end TM voted to indefinitely postpone.’

The citizens petition to change the soil conservation bylaw was tabled. Amid some confusion on whether or not discussion on the article itself should have been taking place after a motion to table, residents still managed to have their say. There was a motion to table and a motion for Indefinite Postponement.

Deborah Polchlppek read her statement anyway, saying that PJ Keating has been able to get around the current bylaw and keep operating in a manner that is detrimental to the neighborhood.

She said they do not want to shut down the quarry, they want PJK to comply with regulations. The company has sent out mailings with “bold faced lies,” she said.

TM also voted to approve all the capital projects using free cash and the ambulance fund. The items using Communication Preservation funds were not voted on because the Community Preservation Committee had not met to vote on them.

The capital projects that were approved included $320,000 for the Fire Department to buy new breathing apparatus, from the ambulance fund. Free cash items were: a request from the public works department for $280,000 for a 10-wheel sander/plow truck; $50,000 from free cash for a slide-in sander to be able to use a snow truck for sanding as well; $86,400 for the police department to buy tasers; $9,500 from for a new computer workstation and software for the police department; $15,000 for roof preventive maintenance for the school department; $45,000 for the school department parking lots; $16,000 for a new gas furnace for the EMA.

The meeting is available on the town’s YouTube page at: https://www.youtube.com/watch?v=QZ15ize6U7U