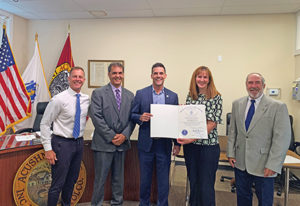 At its meeting on Monday 7/12 the Acushnet Selectboard recognized  police officer James Costa on is retirement, and recognized Fairhaven High Valedictorian Sean Brown, and Council on Aging Director Heather Sylvia.

The Selectboard first announced some resignations. Selectboard Chair­per­son David Desroches announced the resignation of Ray LeBlanc from the Bylaw Review Committee. Mr. Desroches said Mr. LeBlanc has served the town for 30 years and appreciates all he has done for the town.

Selectboard member David Wojnar thanked Mr. Cabral for his out­standing service and said Mr. Cabral was a jack of all trades and voice of reason within the town.

Mr. Desroches said that there will be an opening for Town Moderator and they will leave the position open for a month and decide on a appoint­ment at the next meeting.A

Anyone interested in the position should send a letter of interest to the Selectboard.

Mr. Desroches said whoever is chosen as Town Moderator will hold the position until the next election in May, 2022, when the person can run for reelection. 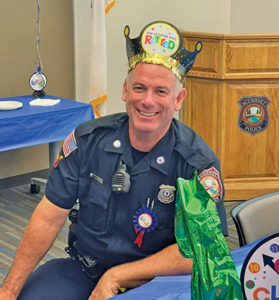 Acushnet Police Officer Jimmy Costa has a little fun on what was presumably his last day of work on 7/16/21, wearing a hat that says “the legend has retired.” Mr. Costa was recognized at the Acushnet Selectboard meeting on 7/12/21. Photo from the Acushnet Police Department Facebook page.

In another matter the board acknowl­edged the retirement of police officer James Costa. Mr. Desroches said that the town appreciated his service for the last 33 years.

“Let me know when the retirement party is,” said Mr. Gaspar laughing.

Mr. Richmond asked if the Selectboard would allow Mr. Costa to be a special officer, so he can still help out the police department occasionally with police details.

The board voted unanimously to make Mr. Costa a special officer.

In another matter the Selectboard presented Fairhaven High Valedic­torian Sean Brown with an official citation of congratulations for his academic achievement from the Selectboard.

Mr. Brown said he will be attending the University of Massachusetts Amherst to study computer engineer­ing and he will be living on campus.

Mr. Wojnar said he has had the good fortune of knowing the Brown’s family and he is so proud of Mr. Brown’s accomplishments.

Also at the meeting, Council on Aging Director Heather Sylvia was presented with the Commonwealth Heroine of Massachusetts Award from State Repre­sentative Chris Hendricks. Mr. Hendricks said he was presenting the award to Ms. Sylvia for her outstand­ing work during the COVID-19 crisis.

Mr. Hendricks thanked Ms. Sylvia for all she has done, adding that the people at the Council on Aging absolutely love her and that she has made such a difference in their lives.

The Selectboard commended Ms. Sylvia on her outstanding work.

In other business, Fire Chief Kevin Gallagher appeared in front of the board to get approval for the Assess­ment Center and Deputy Officer position. At the last Selectboard meeting Mr. Gallagher presented the information and the board members wanted time to think/look it over.

The board voted unanimously to approve the new position and assess­ment center.

The board also discussed the AFCSME union wage and classifica­tion plan. Mr. Desroches said he wanted more time to look it over. Mr. Gaspar agreed and the board tabled the issue until the next meeting.