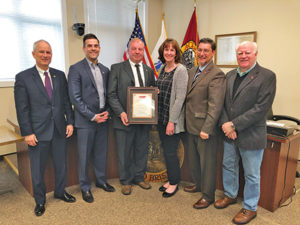 The Acushnet Selectboard con­tinued to review FY20 department budgets at its meeting on 3/19. Board member Kevin Gaspar was absent.

Technology Director Chris Olive r explained what his department had accomplished in 2018, including Wi-Fi in Town Hall and the Parting Ways building, and access control. He said they were in the final stages of a computer network audit.

Mr. Oliver said he was presenting a level service budget which included a software maintenance agreement, and more hours for a network technician. He also included $10,000 to train staff about passwords, and sharing documents protocols. He explained he never wanted to be in a position of a “ransom hacker.”

“To keep our name out of the paper so to speak,” said Selectboard member Roger Cabral said, eliciting a chuckle.

The Selectboard also heard from Department of Public Works Director  Dan Menard on his budget for vehicles.

He discussed a liftgate for a truck, he said was mostly for safety for his employees; and a water department pickup truck, that is four wheel drive, and one ton with a plow on it.

Mr. Menard stated that his department does all the maintenance on Town vehicles and that he was asking for a lift for inside the garage to help with the work on vehicles.

Carol Harris of Woodard & Curran was also presented a review of Phase III of the Infilitration and Inflow Investigation taking place in the Town. Ms. Harris explained that phase one was done in 2016, phase two in 2018, which means that 47% of sewer collection has been investi­gated as well as 37% of manholes.  She said this was a continuation of the program that included another fifty manholes and 9,700 feet of linear piping. Ms. Harris said they would be working with Mr. Menard to complete phase three.

Mr. Noble expressed his concern about the price tag of $1.2 million they were asking to develop a plan for a needs area. He said he was very concerned with that dollar price and asked them to contact him to discuss it.

The Selectboard also gave Mr. Noble his Performance Review at the meeting, with Chairperson Michael Cioper stating the Board was generally very pleased with his performance, his communication and his leadership skills.

“You have brought a team attitude in the Town, which is admirable,” Mr. Cioper said as he thanked him for his efforts.

Mr. Cabral echoed Mr. Cioper by saying he to was very happy with the work Mr. Noble was doing.

In the Town Administrator’s report, Mr. Noble stated he had given the Board his first rough draft ofTown Meeting Warrant Articles, and stated there were 39. He told the board they would still need to vote on accepting each article for the warrant at a future meeting.

In other business, the Selectboard and the Council on Aging were presented with an award from AARP State Director Michael Festa com­mending the Town of Acushnet on becoming “an age friendly community.”