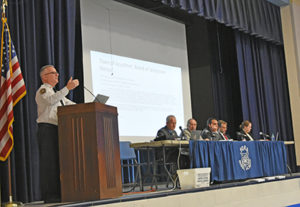 The Acushnet Selectboard faced about 100 residents at a public hearing at Ford Middle School to talk about PJ Keating’s plan to move its asphalt plant to the front of the property on South Main Street. The site operates as a quarry and an asphalt plant. The plant itself has already been relocated. The hearing was to discuss a permit for relocating the tanks, which will hold 70,000 gallons of liquid asphalt. Two tanks hold 20,000 gallons and one tank holds 30,000 gallons.

After a bylaw change in 2016 that allowed for the structures to be moved closer to the road, the company proceeded with plans to move the asphalt plant.

The town believed it had no authority to stop or regulate the change, until recently.

Selectboard chairperson Roger Cabral explained to residents that the company had already begun moving the plant to the front. But to complete the process, they need a “land use license” and approval by the town and the Fire Department, both of which can put restrictions on the license. 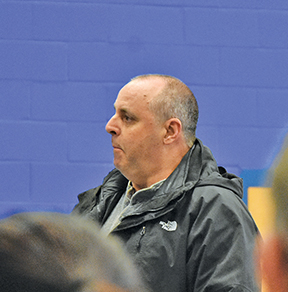 Kevin Smith addresses Acushnet town officials at a public hearing on 2/11/20, to discuss changes to the land use permit for PJ Keating. Photo by Beth David.

Fire Chief Kevin Gallagher ex­plained that any permit for more than 10,000 gallons needs approval of the state fire marshall. But, the fire marshall will not even open the packet, he said, until the land use license is approved by the town.

In order to make asphalt, which is the paving material used on roads, the company needs to mix liquid asphalt with sand and gravel from the quarry.

The liquid asphalt is trucked in and stored in the tanks. That substance is mixed and heated with sand and gravel from the quarry which has been stored in silos that have already been constructed closer to the road. The final product is the asphalt that is used to pave roads.

The company has two separate operations at the site, which require different permits: the quarry, and the asphalt plant.

The asphalt plant has been in operation for decades, but has been “tucked away in the woods,” said Chief Gallagher. The old facility was 1450 feet away from the closest residence. The new one will be 374 feet from a house.

Chief Gallagher also explained how the town has tried to improve its handling of complaints about the company’s operation. He said they set up a web portal so people would not have to use 911 to complain about noise or dust or other issues.

He also noted that the land use license is good for only one year, so they can make adjustments based on complaints. The original license was issued in 1995 and had no conditions in it, he said.

“So we’ve learned from the mistakes of the past,” said Chief Gallagher.

He said there will now be quarterly reports that will posted online.

Chief Gallagher also noted that the state only inspects the plant every three to five years. He said the conditions issued by the state Department of Environmental Protec­tion (DEP) and the federal Environ­mental Protection Agency (EPA) are ten years old. He said that is on the state, not the town.

Chief Gallagher also told the crowd that the town would be asking for funds to hire a part time health agent at the next town meeting. He said that person’s job would be to monitor the PJ Keating site. The job will be an agent of the Soil Conservation Board, and will be “your boots on the ground.”

He said the permit will cost PJ Keating $16,000, so it will, in effect, pay for half the salary of that person. 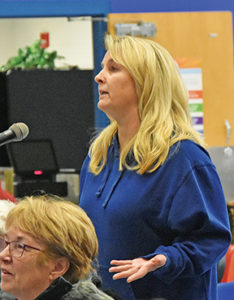 Cathy Santos addresses Acushnet town officials at a public hearing on 2/11/20, to discuss changes to the land use permit for PJ Keating. Photo by Beth David.

Kevin Smith, who said he was head of the neighborhood PJ Keating group, said all the things that the chief was talking about were supposed to be put into place months ago.

“Now we’re hearing that none of that was done,” said Mr. Smith, noting that there has also been a “mass exodus” of PJ Keating personnel. “What did we spend the last six months doing?”

“Follow through with it, or don’t give them the permit,” said Mr. Smith to some big applause.

Mr. Cabral said it was town meeting and the planning board that allowed the bylaws change. He said the company has the right, but now “all of a sudden,” we have some authority.”

Ms. Santos said she understood why the company would want to do it, but she did not know why the town would want to. She also said that people may argue that the quarry has been there for decades, “but the quarry is not what it was.”

“I just don’t know why you’d want to do this,” said Ms. Santos. “How does it benefit the town?”

Mr. Cabral acknowledged that it does not benefit the town.

“Nobody wants it except PJ Keat­ing,” said Ms. Santos. “Do not sign it.”

She said let them continue doing what they have been doing, and they have “gotten away with a ton for a long time.”

Cheryl Hall said she has been attending Board of Health meetings to no avail for two years. She said she gets “grit” in her eyes when she runs along South Main Street.

“There’s so much filth and dust coming off that property right now,” said Ms. Hall, asking how it is possible that elected officials had no idea.

She said as a group, the neighbors have tried to work with PJK and the town.

“I can’t go outside my door now,” she said. “It stinks. The smell is horrendous.” 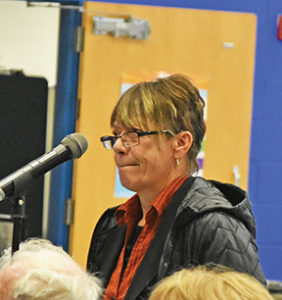 Deborah Polchlepek addresses Acushnet town officials at a public hearing on 2/11/20, to discuss changes to the land use permit for PJ Keating. Photo by Beth David.

She said loud noises start at 5 a.m. and it is “unacceptable.”

“They have gotten too big,” said Mary Lebeau. “I grew up here. It was not like that when I was a kid.”

She also said the street sweeper “does nothing,” eliciting loud laughter from many in attendance.

One man who lives on South Main Street said officials were talking about what PJK wants to do.

“We want PJ Keating out of the neighborhood, that’s the bottom line,” he said. “This is about the quality of life. This is something we don’t hear from you guys.”

He said there are carcinogens in the air that they are breathing in and eating when they cook on the grill. They suffer from sleep deprivation because of the tailgates slamming at all hours.

Gilbert Martins also mentioned the street sweeper, to another raucous round of laughter, saying it went down his street for the first time since Christmas.

“Because of the meeting tonight, it came yesterday,” said Mr. Martins. “It happens every time.”

Elizabeth Perry said her deck has to be realigned every year because the blasting from the quarry causes it to slide off the base.

“Every day I come home from work I have to fix every picture in my house,” she said.

“You don’t need to do anything to convince me,” said Selectboard member Kevin Gaspar.

He said he was “appalled” that nothing was done about the dust. He said he was independent and: “I assure you nobody from PJ Keating is going to make me vote otherwise.”

He said, however, that he did not see the board shutting down the company. He noted that the bylaw change in 2016 is what made the change possible.

“There was only one man who knew it was going to be a problem and he’s speaking to you now,” said Mr. Gaspar.

David Desroches, the newest member of the board who was not on the board in 2016, said he needed more information before he could vote.

“I think it’s unrealistic to think the board of selectmen is going to shut down the quarry,” said Mr. Desroches. “We’re here tonight to talk about the asphalt operation.”

Mr. Martins told the board that he and his family have nothing but medical problems since PJK increased operations.

“Keating, you’re terrorists,” said Mr. Martins. “You’re keeping all these people inside with the windows closed. You’re keeping us from enjoying spring,” their pools, their yards.

“I think it’s time you started putting all these property owners, their children and their grand­children before [PJK],” said Mr. Martin. “We want our homes back.”

Residents also discussed a variety of actions that the company was supposed to undertake to mitigate the effects of dust and noise, but were not ever done. 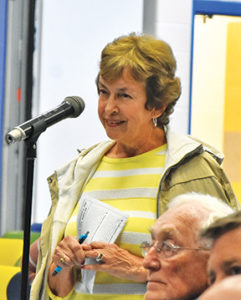 Mary Lebeau addresses Acushnet town officials at a public hearing on 2/11/20, to discuss changes to the land use permit for PJ Keating. Photo by Beth David.

Rob Robinson of PJ Keating said the company does conduct dust inspections, and even has monitors on their workers.

“I don’t want to be discharging dust around the area,” said Mr. Robinson, but he got laughed at when he said some people in the neighbor­hood told him it had gotten better.

“I hear a lot of people laughing,” he said, adding that their livelihoods and employees’ work depends on the company. “I’ll also point out, we pay taxes as well.”

Deborah Polchlepek said she had thousands of pictures of her property with windows, decks, air conditioner “packed with rock dust.”

“We want accountability. We haven’t gotten it in the past,” said Ms. Polchlepek. “Do you really think we’re going to get it in the future?”

Eric Chew said he supported put­ting restrictions on the company, but that they should be careful because “they pay a big tax in this town.”

He said if that amount is dis­tributed among all 3700 households, it comes to $5 each. (Although his math was flawed, it is actually about $40 each.)

“We’ll take it,” said a voice from the crowd above loud applause.

The board continued the public hearing until March 24.

After the hearing, Mass. State Rep. Christopher Hendricks, whose district includes Acushnet, stayed to speak with residents. He said the selectboard had the power to stop the project.

“Obviously, there is a tax incentive,” he said to keeping any operation running in a city or town. “But if they’re saying that’s not the issue, I think these folks in this neighborhood have suffered for far too long.”

He also said he would be willing to work with the town to get a better response from the DEP and EPA.

The entire public hearing is available online at https://www.youtube.com/watch?v=qqCubIGY_Sw