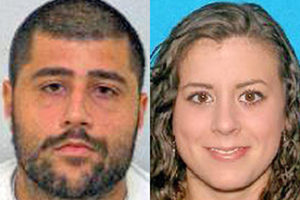 Acushnet Police have obtained arrest warrants for Nathan Rose-Morey, 29, of New Bedford and Yarmouth; and Michelle Hayduk, 29, of South Dennis, in connection with the stabbing on 8/1/18. Photo from Acushnet Police Department Facebook page.

The Acushnet Police are request­ing the public’s help in locating two individuals believed to be involved in a stabbing and robbery in town.

On Wednesday August 1, at approxi­mately 9:43 p.m., Acushnet Police units were dispatched for a report of a man bleeding. Upon further investi­ga­tion, it was found that the male suffered multiple stab wounds. The male victim was transported to Rhode Island Hospital.

The victim informed police responders that he was in a vehicle with two acquaintances. The two then turned on him and started stabbing him. The victim escaped the vehicle and the suspects fled the area.

Through further investigation, the APD has obtained arrest warrants for Nathan Rose-Morey, 29, of New Bedford and Yarmouth, and Michelle Hayduk, 29, of South Dennis.

The APD believes Rose-Morey and Hayduk to be operating a 2016 Nissan Rouge, white in color, bearing Massachusetts Registration 1DWG81.

Anyone with information on the whereabouts of the suspects or the vehicle is asked to contact the Acush­net Police Department, 508-998-0240.