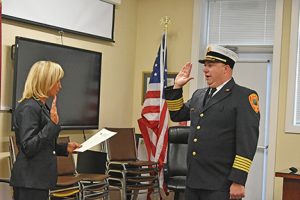 Acushnet’s new fire chief got sworn in and three new police officers were hired at the Acushnet Selectboard meeting on 11/22/22.

The Oath of Office binds him to upholding and defending the Consti­tu­tion of the United States, and laws and regulations of the town and the department, and that he will “always have the courage to hold myself and others accountable for our actions.”

Selectboard Chairperson David Wojnar said it was “well deserved,” and he looked forward to watching him grow in the position.

Chief Richmond kept his remarks short, thanking the board for the opportunity.

The board also appointed Chief Farland as the Director of the Emergency Management Agency, which was previously a separate position filled by Jerry Bergeron who retired. 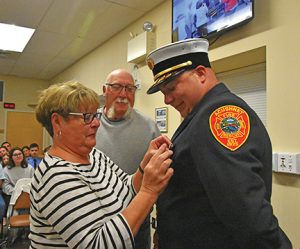 Patricia Farland pins the badge on her son, Acushnet Fire Chief Thomas Farland, after he is sworn in during the Acushnet Selectboard meeting on 11/22/22, as his father Albert Farland watches. Photo by Beth David.

In another matter, the board hired three police officers and an alternate to fill vacancies.

Police Chief Christopher Rich­mond told the board he had three full time positions to fill. He explained the Civil Service procedure. They re­ceived nine applications from Civil Service; seven were given “lengthy applications,” he said.

The remaining two will have to go to a certified police academy, hope­fully in February.

“We’re up against the gun for the  February one,” he said. “We’re really held captive by the scheduling.”

He said it would be wise to have an alternate so they will be ahead when they call for the list again.

Courtney Soares said that since middle school she has wanted to be a police officer. There’s something great, she said, about leaving people in a better position than you found them.

Ms. Soares, who is originally from the area, has a Master’s degree in Criminal Justice from Fitchburg State University and is currently an officer there. She told the board she also has sexual assault training, self defense for women, and other training. 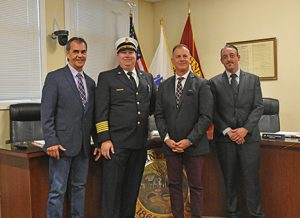 “I look forward to continuing my training and my career with the Acushnet police department,” she said.

Ms. Wojnar said she had a great background and would be a great asset to the town.

Joshua Freitas is a long time Acushnet resident and is in the National Guard as a Military Police officer. He is pursuing a Bachelor’s in Criminal Justice at Bridgewater State University.

Mr. Freitas told the board that he was born and raised in Acushnet and went to Old Colony, where he chose automotive. He said he knew he wanted to be a police officer, but they did not have a criminal justice program.

So he joined the National Guard after high school and chose military police.

“So I got some background in criminal justice,:” he said, figuring it would be a good step to learn.

“I’m just thankful for the opportunity, and can’t wait to see where this brings me,” said Mr. Freitas.

Mr. Wojnar said his background was incredible, adding, “Thank you for sticking with Acushnet.”

Leah Rego is also a long time Acushnet resident who has been a full time 911 dispatcher for the depart­ment for more than two years. She put herself through the part time police academy during COVID, with no guarantee of a job.

“I would like to continue my career and go to the officer side,” she said.

Mr. Wojnar said she was “pretty amazing,” betting on herself and making it happen.

Ryan Rego, who is the alternate in the event that one of the others does not fulfill entry requirements, is also a long time Acushnet resident. He is enrolled at UMassD pursuing a Bachelor’s degree in Criminal Justice.

He is also a member of the UMassD football team.

Mr. Rego also went to Old Colony and chose carpentry, but he always had a “passion for law enforcement,” he said.

SB member Robert Hinckley said it seemed that everyone was “really excited about protecting our town.

He told them Chief Richmond was a smart man and they just “just pay attention to everything he does.”

SB member Kevin Gaspar said he was proud to see Old Colony students and products of Acushnet school system “step up to the plate.”

“I think you’ll enjoy working in the town of Acushnet,” said Mr. Gaspar, add­ing it is a “nice, little community” and a “great town.”

“I’m very proud of the town I reside in,” said Mr. Gaspar.

In another matter, the board hired Andrew Bobola as building commis­sioner. He has a lot of experience and is the “perfect mentor,” said Town Administrator James Kelley.

He said Acushnet is growing, and Mr. Bobola will be training people to take over. Mr. Bobola is retired from his Building Commissioner job, but he is able to work full time because pension rules changed due to the pandemic.

The board also discussed improve­ments to the Veterans Memorial. Mr. Kelley said the public works depart­ment moved the pole and tried to move the sign, but it was in poor shape. He said the veterans organiza­tions will be replacing the signs.

The board also discussed the Slocum Street/ Nye Avenue project and the Hamlin Street project.

Mr. Kelley said he is getting bids on the Slocum/ Nye project so they will be on track to use ARPA Funds (American Rescue Plan Act) for the multi-million dollar project.

Mr. Gaspar said he couldn’t believe the high prices quoted, saying they aer “beyond me.”

“I’m shocked that that short stretch of road is four to five million,” he said.

“Talk about sticker shock,” said Mr. Wojnar when they got to the Hamlin Street project, which will cost $4-5 million, and will take three years to construct, for a few hundred feet of road.

Mr. Kelley said it was a MassDOT project and part of the problem is that it requires “great deal of mitiga­tion” because it is a water body.

“Most bridges are,” said Mr. Gaspar, adding that he agreed with Mr. Wojnar that three years is a long time, but he added that the project is long overdue.

“I can’t even fathom shutting down that road for three years,” said Mr. Gaspar.

The project should start this week, with signs going up on 12/1. Hamlin Street will be closed to through traffic beginning 12/19 until the end of the project in December, 2025.

The board also updated the public on the snow plow situation. Mr. Gaspar said the town potentially has more than 20 snow plow drivers for the winter. He said 15 are under contract, and six more are expected to sign on. The town increased the rate this year to attract more drivers.

Mr. Wojnar said the board took “decisive action” to increase the rates.

Mr. Gaspar said the town usually has 30 drivers, so if anyone is interested, contact the DPW office.