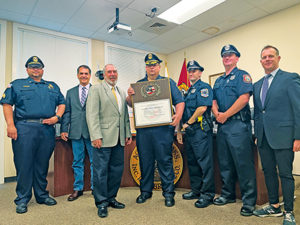 At its meeting on 4/26/22, the Acushnet Select Board formally recognized The Acushnet Police Department for achieving a goal 12 years in the making. The Massachu­setts Police Association Commission Inc awarded the department with a Certificate of Certification bringing them one step closer to full accreditation.

According to Acushnet Police Chief Christopher R. Richmond the distinc­tion is held by only 25 percent of all law enforcement agencies in Massa­chu­setts. He said expects the depart­ment to become fully accredited in about a year.

Chief Richmond gave credit to his whole department for the accom­plish­ment. He also recognized that Officer Jason White volunteered to work on the certification to accredita­tion process.

“Officer White accomplished in two years dedicating one day a week when other departments had full time staff finishing it in a year and a half,” Chief Richmond said.

Along with Police Officer White, Police Sergeant Jeremy Fontes and Police Officer Ryan Hemphill were also credited with crawling through years of hard copy files, some in ring binders, to sort and bring the files up to 21st century standards.

Chief Richmond said there were tangible and intangible reasons for needing the accreditation.

“The first tangible benefit, and it is relatively small when you think about it, is we are entitled to a $625.00 credit from MIIA the town’s insurer,” said the Chief.

He said the intangible included reduction of liability and risk to the town and that, “It also makes for a more professional depart­ment based on sound policy, when we are able to document and show what we do.”

He added that the adopted policies and procedures and the network of documentation will assist the depart­ment in keeping up with the ever changing landscape of policing.

“I will finish up with police reform,” said Chief Richmond. “This is the smartest thing the town could be doing to make sure we are staying in compliance with a lot of the regula­tions that have been promulgated and what will come in regards to that legislation.”