On February 3, the Acushnet Fire Department started a new feature on its Facebook page to introduce each of their members to the public. This week we meet David Bernard. 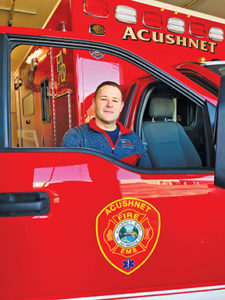 Some people are just born to work in public service. David Bernard is one such person. He started his service to Acushnet in 1997 as a part-time EMT Basic before being hired full-time shortly after. He went to paramedic school when it became clear that St. Luke’s Hospital was no longer going to provide paramedic level services to the communities of greater New Bedford. In 1999, Dave Bernard became Acushnet’s first full-time Paramedic. He attended the Call Firefighter Training Academy in 2003 and received certification as a Firefighter Level I/II.

In 2005, Dave left Acushnet to become a full-time Firefighter/ Paramedic for the town of Fairhaven and was sent to the full-time Firefighter Recruit Program operated by the Massachusetts Fire­fighting Academy in Stow. He left Fairhaven in 2007 for the Berkley Police Department where he currently holds the rank of Sergeant. Last year we brought Dave on as a part-time Para­medic.

He’s back where it all began!

An Acushnet resident, Dave Bernard also served in the Massachu­setts National Guard from 1994–2014.

Acushnet, this is David Bernard.