Acushnet is planning a birthday party. The building that bears the name of “Marie S. Howard” at 232 Middle Road was a school, a community center, and is now the Acushnet Public Library.

Nancy Francis, a long-time Acushnet schoolteacher and director of the former community center, is collecting photos and stories to share with the public next May.

“We’re having a big party,” said Ms. Francis, adding that they had two entertainers lined up for music and other activities for children and adults.

The focus of the event, however, will be the memories surrounding the building and its many uses over the years.

Ms. Francis has been busy researching the history of the building.

While it was a community center, it was the venue for many middle school dances. Ms. Francis is hoping that people who attended those dances will share pictures and stories.

She was available at the library on Saturday, 10/12, hoping people would stop by with stories, but, she said, not many people came by. She used to tutor students in the building, organized the dances, and ran many programs throughout the years, so she knows there are a lot of good memories out there.

“We are still looking for pictures or any memories people have of attending the Howard School or programs at the Community Center,” wrote Ms. Francis in an email.

People do not have to give their photos up, she emphasized. The photos will be scanned on the spot and handed right back to them.

If people want to scan their own photos, they can email the digital files to acupl@sailsinc.org or acushnetfriends@gmail.com and indicate in the email that they are for the 100th birthday project.

Ms. Francis said she has some class photos from the Howard School, but she knows there are more out there. During the course of her research, she learned that records have been lost or misplaced at various departments.

“We’re still working on trying to get some records,” said Ms. Francis, but she did not sound hopeful.

She is hoping that information from former students will fill in the gaps.

She knows some history, it was an elementary school, then the public kindergarten. She said the year that the new elementary school was built in the late 60s or early 70s, 200 children moved into town. So they resurrected the Howard School for the kindergarten class, which lasted for a few years.

A nonprofit used the building for a time, it was empty off and on for years. Then it became the community center.

She recalled the bad shape it was in when she took it over with a few volunteers to create the community center. The roof was no good, and the plaster was “falling off the walls.”

There was also a “weird glass room” and inner rooms that she is very curious about.

To learn more, to send pictures, or to find out when the next Centennial Committee meeting is, email acupl@sailsinc.org or call the library at 508-998-0270. 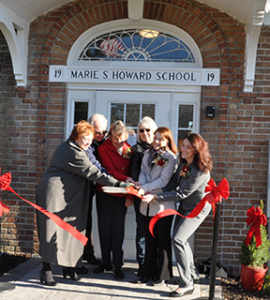 Library officials cut the ribbon at the new Acushnet Library, 232 Middle Road, on 12/20/15. The building was once the Marie S. Howard School and then served the town for many years as a community center. Photo by Beth David.