An end-of-year fired completely destroyed a home at 2 Gammons Road in Acushnet. At 3:24 a.m. on Saturday, 12/30, firefighters responded to the report of a fire. Crews found that the occupants of the home had evacuated safely. Firefighters observed fire in the front, rear and through the roof of the building at the time of their arrival, according to a statement on the Acushnet Fire & EMS Facebook page. 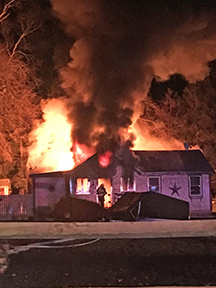 A fire fully engulfs the home at 2 Gammons Road in Acushnet on 1/2/18. Acushnet Fire Department photo.

The fire was fought from outside the building due to structural concerns. It took firefighters 45 minutes, in single digit temperatures, to extinguish the blaze.

“We are very thankful that the occupants are safe and that there were no injuries to first responders,” stated Acushnet Fire Chief Kevin A. Gallagher. “There was a tremendous amount of fire and ice”.

Investigators from the State Fire Marshal’s investigated and the Red Cross is provided assistance.

The home, occupied by David Hodges and Robin Perry, is owned by Ms. Perry, according to online town records. A GoFundMe page started by Mr. Hodges’s daughter, Hannah Hodges, states that they lost everything. (Visit https://www. gofundme.com/4xq0zrc to donate.)

“My dad David Hodges, Robin Perry & their dog Hershey safely made it out okay but they are suffering the loss of everything,” wrote Ms. Hodges on the page. “They lost clothes, food, cherishables, etc… I would like to try and help my dad get some extra money to get some clothes and other essentials that they might need. My dad and I don’t always see eye to eye but I love my dad and want to do everything I can to help him and his girlfriend get their life and belongings back together.”

Another GoFundMe page, at https://www.gofundme.com/robin-perry-house-fire-recovery, created by Kaiya Kaye Madeira, is also raising money for the couple.

“Robin is an amazing person with a heart of gold and although she is not asking for help, I am trying to get her and her family some help due to this tragedy,” reads the page. “Please consider donating today to help them get on their feet in this new year…. even $5 would be a generous gift.”

The Acushnet Firefighters Associa­tion will also accept checks dropped off at the fire station to give to the couple.

In a follow-up phone interview, Chief Gallagher said the cause was electrical and started in the bedroom. 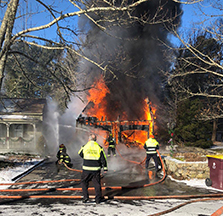 A fire on January 2 destroyed a garage at 189 Leonard Street. The structure was fully involved upon arrival at about 9:55 a.m. Initial hose lines were used to protect the residence, which was only 10 feet away from the burning garage. Two windows in the home broke from the heat, otherwise the residence was not damaged. There were no injuries

Rochester Fire Department pro­vided a tanker with 3,000 gallons of water while the Fairhaven Fire Depart­ment provided station coverage. There are no hydrants near the home.

The cause of the fire was determined to be a charger that was charging an all-terrain vehicle (ATV), Chief Gallagher said in a phone interview. The property belongs to John DeTerra.
All contents of the garage, including the ATV, lawn mower and other equipment were destroyed.

On Tuesday, 1/2, at 4:20 p.m., the Acushnet Fire Department announced delays, due to closing Main Street from Saucier Street to River Road because of a chimney fire at 17 Main Street. Fairhaven Ladder #1 provided mutual aid assistance. The home is owned and occupied by Frank and Cheryl Ramos, and also occuped by Donna and Francis O’Brien according to town records.

Also on January 2, at about 1:30 a.m., Acushnet responded to a garage fire on Robinson Road that was on the Rochester line. The detached garage, two motorcycles and a passenger vehicle were destroyed in the fire.