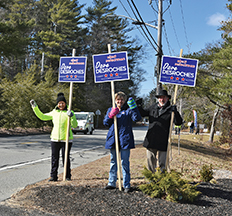 L-R: Gloria Richard and Jo-Ann Richard hold signs at the polls on election day, with Dave Desroches, who pulled off a big upset in Acushnet when he beat the incumbent by a large margin on 4/1/19. Photo by Beth David.

Newcomer to politics David Desroches pulled off an upset in Acushnet on Monday, 4/1/19, when he unseated incumbent Michael Cioper for a seat on the Selectboard, with a decisive 670 votes to 443.* Voter turnout was about 15%, a sharp uptick from last year’s dismal 5.25%.

Mr. Desroches told voters at candi­dates night that he knocked on more than 400 doors during the campaign. In a phone interview after the election he said he that had grown to more than 600 houses. He also used social media to bring up a variety of issues.

He was shocked, he said, when he realized he had won, to think of where he started and where he ended up.

“It’s been a really good ride,” he said. “I couldn’t have done it without the people who supported me.”

A group of people backed him and worked so hard that it motivated him not to let them down.

He went to town hall to get the numbers as they came in, and slowly realized he had won.

He said he felt he did well at candidates night, but it was the issues and his campaigning that did it. Mr. Desroches differed with his opponent on a plan to take the police chief position out of Civil Service, and spending priorities for the town.

He also criticized the town for locating polling places at the elementary school. He said his Facebook post about that received 1800 engagements.

“I think I out-campaigned him,” said Mr. Desroches about his oppo­nent. “I believe he could’ve under­estimated me. You’ll have to ask Mike.”

The Selectboard already had its first meeting, on Tuesday, the day after the election, and it lasted almost three hours. He took the credit (or the blame) for that.

Although he went over the agenda with Town Administrator Brian Noble, Mr. Desroches said there were still too many things he did not understand, or wanted to do research on before voting. The board went over Town Meeting articles.

The other board members were very accommodating, he said, and agreed to hold an additional meeting on Monday, 4/8, holding off on votes so Mr. Desroches could research some issues.

Right now, it’s all financial, budgets, numbers, spreadsheets, he said, while the town figures out next year’s budget.

“I got sworn in at two and was at a meeting at five,” he said, noting it is a lot of work, but he is not daunted.

He also said he does not want to dwell on past disagreements.

“I come here with a clean slate,” he said. “Whatever happened in the past is past.”

Mr. Desroches said he wants to work with both of his fellow Selectboard members, noting that they agree on a number of issues, but admitting: “We have our differences.”

The Selectboard was the only con­tested race in Acushnet.

There was no candidate for Park Commissioner. Anyone interested in serving on that board should contact the Acushnet Town Clerk, 508-998-0215.

*All numbers are preliminary, results were not certified by press time.