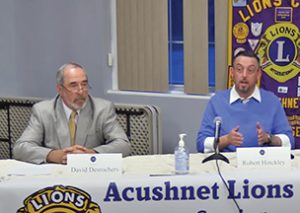 L-R: Acushnet Select Board incumbent David Desroches listens as challenger Robert Hinckley answers a question during the Acushnet candidates night sponsored by the Acushnet Lions Club on 5/3/22 at the Council on Aging/Senior Center. Screenshot from Acushnet Cable TV video.

Incumbent Selectboard Chairper­son David Desroches opened the Selectboard segment saying he was seeking a second term because the work is not done, and cited many projects in the works including South Main Street improvements and ongoing negotiations with PJ Keating.

Challenger Robert J. Hinkley said he wanted to serve the town and get townspeople involved. He first mentioned a focus on some infra­structure issues and education.

Voters asked where the candidates stood on issues like the solar farm moratorium or the MBTA impact on South Main Street and Slocum Street.  Residents also wanted to know about the ongoing issues with PJ Keatiing and employee retention in town departments.

Mr. Desroches assured voters that the town boards were collaboratively working on all the concerns and outlined tentative plans with the state for Sout Main Street, as well as sup­porting the solar farm moratorium. Hinkley agreed, 19 solar farms were enough.

On PJ Keating Mr. Hinkley said the corporation has to come into compliance and he would work hard with people to assure compliance. Mr. Desroches pointed to the compli­cated negotia­tions in place saying the new town adminis­trator has been a great help in restarting the process in earnest. 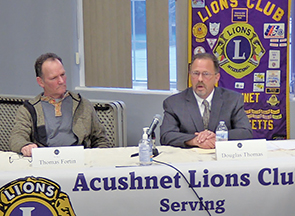 L-R: Acushnet Board of Health incumbent Thomas Fortin listens as challenger Douglas Thomas answers a question during the Acushnet candidates night sponsored by the Acushnet Lions Club on 5/3/22 at the Council on Aging/Senior Center. Screenshot from Acushnet Cable TV video.

On retaining town employees, Mr. Desroches said he under­stands but Acush­net salaries are lower than most towns. He admitted it had been a challenge and in the past mistakes were made. Mr. Hinkley said he would like to see an environment where the town employees feel safe and valued.

Both candidates ended with an appeal to voters to become involved.

In the Board of Health race, incumbent Thomas Fortin faced challenger Douglas Thomas.

Mr. Fortin cited his 36 years of experience with the board and listed some accomplishments and plans. Mr. Thomas said he wanted to challenge Mr. Fortin because he had issues with an agreement the town has with the Fairhaven Visiting Nurse Association. Mr. Thomas questioned why the board did not use them during the COVID response.

Mr. Fortin assured voters that his board coordinated daily with the state and the town’s EMS during the pandemic. Fire Chief Kevin Gallagher was instrumental and in agreement with all the work his department and the EMS did on behalf of the town. Everything the board did was according to state guidelines. Mr. Fortin did not fail to mention how difficult the task was.

School Committee incumbents Jennifer S. Downing and Sarah Gomes, who are both running for the two three-year seats, introduced themselves and talked about the accomplishments they and the school committee have achieved. Ms. Gomes has 12 years experience with the Acushnet School system and seven years on the school committee. Ms. Downing is running for a second term.

Acushnet voters will head to the polls Saturday, March 14th. All precincts will vote at the Acushnet Elementary School. Polls will be open from 10 AM to 6 PM.

An uncontested Mark P Francois is running for a Planning Commission seat for the remainder of an unex­pired term ending May 17th 2025.

Candidates for reelection include Liberio DaSilva Soares for a three year assessor term, Jennifer S. Downing and Sarah Gomes for two three-year school committee seats, Charlene Fortin for a three-year seat on the cemetery board, and Stephanie Vonjess for a five-year housing authority seat.

The candidates night is available for viewing on the town’s YouTube channel at https://www.youtube.com/watch?v=WBnPHXUTucc