By John Mark Treadup, Special to the Neighb News

Approximately 30 years ago I spoke at the Fairhaven town hall in recognition of Veterans Day. Some water has gone under the bridge since then, and I am now living down the street at Our Lady’s Haven.

When I spoke there I talked about a friend of mine, Gary, a good looking basketball player from the next town over. He always played well and was killed on duty before he was ever eligible to run for President. Thought I was on the verge of being emotional. A young lady who worked there was a high school classmate of his. 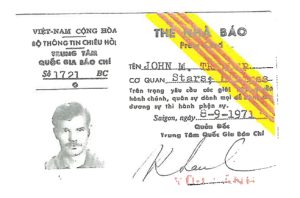 John Mark Treadup was drafted during law school. He served as Vietnam acting and assistant stars and stripes Bureau chief when honorary separated in April of 1972.

Without getting sentimental I’ll try to relate through facts personally, I saw a guy at a bus stop served by American buses who looked strongly familiar. I don’t know what the odds were but it was a now USAID employed man who had lived across the hall from me on the graduate dorm floor. He told me about the monies which were being paid to a foreign rubber tire producer if damage was done to its trees.

I had personal knowledge of bombing coordinates being given to our air force bomber com­mand in Thailand, which had no connection to reality, and they were selected on a pin-the-tail-on-a-donkey process.

The third of my facts relate to the safety of mail, I did have a loaf of sweet bread sent to me by my mother while I was in Southeast Asia which never reached me. My mom didn’t include the APO so that was why. All my other important mail seemed to make it to me from places as far as New Jersey, Kentucky, Texas, and Georgia.

The recent condemnation of such voting by mail might be coming from folks who never waited in a mail line.

These are some of my experiences of Vietnam that I wanted to share with you, Thank you.

John Mark Treadup was drafted during law school. He served as Vietnam acting and assistant stars and stripes Bureau chief when honorary separated in April of 1972.

Support local journalism, donate to the Neighb News with PayPa