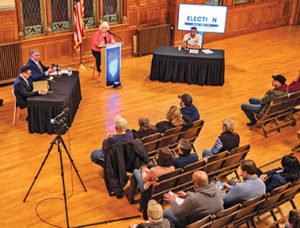 Six of the 11 candidates running for office in Fairhaven showed up at town hall auditorum on Wednesday, 3/11/20, for a Meet the Candidates night sponsored by the Fairhaven Government Access Channel. Shown here are L-R: Selectboard incumbent Charles K. Murphy, Sr.; challenger Keith Silvia; moderator Maria Carvalho; Fairhaven TV Director Derek Frates, who posed the questions to the candidates. About 50 people also attended to hear first-hand what the candidates had to say. Photo by Glenn C. Silva for the Neighb News.

On Wednesday, 3/11/20, six of the 11 candi­dates running for office in Fairhaven voiced their messages to the public at the candidates’ night held in the Fairhaven Town Hall auditorum. The event was sponsored by the Fairhaven Cable Access Channel (Fairhaven TV) and will be cablecast on channel 18, and is also available on demand at www. fairhaventv.com

Moderator Maria Carvalho introduced herself and welcomed everyone, explaining that due to last minute cancellations there would only be one panelist asking questions to candidates. Ms. Carvalho intro­duced Fairhaven TV Director Derek Frates as the panelist for the evening. 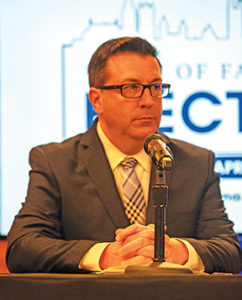 The first candidates were the two run­ning for one seat on the Selectboard. Incumbent Charles K. Murphy, Sr. faces challenger Keith Silvia in that race.

Mr. Murphy started his opening statement by thanking the audience and Fairhaven TV.

He said he was so thankful to have served on the Selectboard and wanted to continue to be on the board for many more years, which is why he is running for re-election.

Mr. Murphy said that there have been many changes during his time on the Selectboard, and some misinformation has been put out there.

In 2014 the Selectboard hired a Town Administrator who has helped do a lot of new thing in town, but it has changed the way some people think about the Selectboard, and the changes the board has been making over the past few years.

Mr. Murphy said they have started to make stricter policies and follow them, as well as make sure all town funds are on track.

Mr. Murphy said there has been a lot of talk about the Selectboard overspending. He said that that is untrue and that all the money spent by the Selectboard can be viewed on the FY20 budget. The board has brought in six million dollars for the budget and around $280,000 worth of grants.

Mr. Murphy also said that the town has an amazing, talented staff working in town, and the community is blessed to have them.

He said he does not like the negativity that has been displayed about his wife, daughter, himself and the Fairhaven Commission on Disabilities that he organizes.

He told voters he has a volunteer spirit and helps many organizations in the area, such as the Commission on Disabilities, Our Lady of Angels Catholic Association, the food pantry and many others.

Mr. Murphy said his mother brought him up to respect and assist everyone, adding that his mother had such a love for the town of Fairhaven. 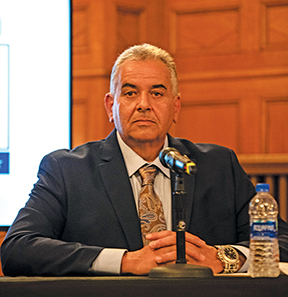 Fairhaven Selectboard candidate Keith Silvia at the Meet the Candidates nigth sponsored by Fairhaven Government Access TV on Wednesday, 3/11/20, in the Town Hall auditorium. Photo by Glenn C. Silva for the Neighb News.

Opposing candidate Mr. Silvia then began his opening statement by thanking the audience for being there.

He stated that he has been a resident of Fairhaven for 40 years and has brought up his three children and one grandchild in the town with his wife.

Mr. Silvia explained that he has been on the Fairhaven Board of Public Works for the last few years and has seen the issues going on in town due to the Selectboard’s decisions.

Mr. Silvia explained that the big BPW sewer nitrogen project which has been mandated by the state will be costing the town millions in borrowed money, but there is no way around it. He said it is something that has to be done, which is why the sewer and water rates have gone up.

Mr. Silvia also explained that the fire and police stations have been waiting years to get a better facility, but he is wondering how necessary it is really is. He said he does not think the town should be spending millions of dollars on a new safety facility.

He also said there are also a lot of issues with the Town Administrator.

Mr. Silvia said he would love to see what the Town Administrator does, because he delegates a lot of his work to other departments.

And now the TA wants to hire an assistant to help him, which will also cost the town a significant amount of money. Mr. Silvia said that between the TA’s salary and his assistant’s future salary their jobs will cost the town around $253,000.

Mr. Silvia also explained that the town has a big issue with depart­ments in the town hall being closed during business hours.

He said he has had contractors come to him and say that they went to town hall and all the doors were shut and the lights were off during work hours in the building depart­ment. Mr. Silvia said he understands that employees need their lunch time and breaks, but there should always be one employee there to cover others breaks.

The Selectboard also has a problem with excessive spending, said Mr. Silvia, adding that the Selectboard does anything the Town Administrator wants. He said that all the borrowing is going to start catching up with town.

After the  closing statements, Mr. Frates had three questions for the candidates. 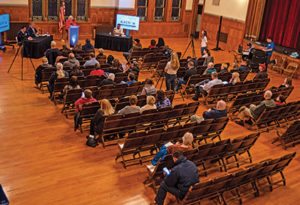 Six of the 11 candidates running for office in Fairhaven showed up at town hall on Wednesday, 3/11/20, for a Meet the Candidates night sponsored by the Fairhaven Government Access Channel. About 50 people also attended to hear first-hand what the candidates had to say. It will be the only candidates night this election season, as the West island Improvement Association’s candidate night was canceled due to the Covid-19 threat. Photo by Glenn C. Silva for the Neighb News.

The first question he asked them both was how they demonstrate that they are independent thinkers in their careers.

Mr. Murphy, who runs a nonprofit that services disabled adults, answered first stating that he has always been an independent thinker. He said at his business he balances money and runs a company. He treats everyone with dignity, respect, and kindness.

Mr. Silvia, an independent contractor, answered the question stating that he has a great reputation for being there for people. He said every time he finishes a building project he gains a friend. He said that everything he says he is going to do he does.

Mr. Silvia said on the BPW a lot people think that board member Robert “Hoppy’ Hobson runs the board, but he does not, we all have our own thoughts and vote on our own.

The second question Mr. Frates asked the candidates was which area of town do they think needs the most improvement and how would they improve it. 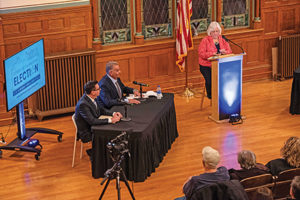 Mr. Murphy stated that he believes North Fairhaven needs the most improvement, adding there is a lot to do in the neighborhood.

Mr. Murphy said that every other part of town should be considered to, but North Fairhaven could use some clean up and updates.

He also said the workforce is not happy here. Mr. Silvia said the doors are always closed and em­ployees need to be at work from 8:30 a.m. to 4:30 p.m. except for lunch breaks, but there should be coverage.

Mr. Silvia also said there is a big morale problem with the em­ployees at town hall. He said that they need to get better policies and work those hours.

The final ques­tion Mr. Frates asked was what their opinions were on changing the name of the Board of Selectmen to the Selectboard to support gender equality, which was recently discussed at a Selectboard meeting.

Mr. Murphy said that at Town meeting they will be able to vote on whether the name should be changed or not. He said that many towns have already changed the name and many are changing them, adding that he is fine with idea, he is just concerned about the cost to change signage,  logos etc. to the new name.

Mr. Murphy said he has absolutely no problem with it as long as it is not too expensive.

Mr. Silvia had quite different opinion, answering that he feels right now that it should continue to be Board of Selectmen.

“There are three men on the board, so it should be Selectmen,” Mr. Silvia said.

He added that if at sometime a woman is elected to the board then the name can be changed to Selectboard.

“Right now, I am a man and I would want to be called Selectman,” Mr. Silvia said.

In his closing statement, Mr. Murphy stated the things that he and the Selectboard have accomplished together: the Selectboard made a 25 mph speed limit in town; expanded and made the veterans’ office  accessible; new businesses opening at the old Benny’s; real estate values are up, houses are selling; and adding stop signs to West Island, which had to be approved by the Selectboard.

“I truly feel like we are doing as much as we can,” Mr. Murphy said. “And we can always do more and I want to do more.”

Mr. Murphy said he wants to do more without overspending and budget efficiently.

“I ask for your vote to continue,” Mr. Murphy said.

Mr. Silvia closed stating that the excessive spending needs to stop. He said there are 5200 senior citizens on fixed incomes and cannot afford for taxes to go up.

He said that they need take the town back under control.

Editor’s note: The Selectboard race is the only contested race in this year’s elections. Other candidates did attend the candidates night, and we will run a story on that portion of the evening in next week’s issue.