Mr. Noble was hired as Acushnet TA in November of 2016, and started in the job at the beginning of 2017. His contract is up for renewal.

He said it is a “great opportunity,” and he was recruited for it. 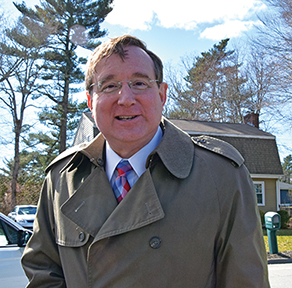 Mr. Noble said he felt that he was leaving a “good track record” in Acushnet.

“I love the people, love the commu­nity,” he said, adding, however, that he was “looking forward to a change.”

He noted that he was the lowest paid chief executive in Bristol County.

The town has also been going through a wage and classification study, which will result in a new pay structure for town employees. The town has lost some key people in recent years, mostly due to the low pay rate in Acushnet.

The W&C classification has led to some clashes with Selectboard members over the last few months.

Mr. Noble, however, only focused on the positive.

He said the town is in good financial shape, leading to the rating agencies wanting to rate the town higher.

“I’m leaving the town financially in very good shape,” said Mr. Noble. “We’ve got a great team in place that really gets it, really  understands what to do to move the town forward.”

He said the budget is in place for FY 2020, the capital plan is in place, too.

“Things look good,” he said.Mr. Noble came from Northfield, Mass., where he was Town Administrator.

“I like the town, I like the department heads,” said Mr. Noble, but added that he looks forward to a change.