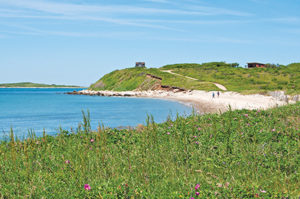 Church’s Beach is now owned by the Town of Gosnold, will be open to the public as part of an acquisition that has preserved 68 acres on Cuttyhunk, part of the Elizabeth Islands chain. Photo courtesy of the Buzzards Bay Coalition.

Dramatic barrier beaches, coastal marsh and upland habitats on Cuttyhunk Island are now secure from the threat of development thanks to a deal that will ensure these unique lands remain natural and are accessible to the public.

The Buzzards Bay Coalition and its partners — the Town of Gosnold, the Commonwealth of Massachusetts, the United States Fish and Wildlife Service, the Bouchard 120 Oil Spill Natural Resources Damages Trustee Council and 198 private donors — completed a $6.1 million acquisition of 68 acres, much of which had been placed on the market for potential development.

The acquisition complements the donation of a conservation restric­tion on a separate 250-acre property on the island’s western end. Together, the two conservation actions protect more than 300 acres of land and more than five miles of Massachusetts coastline — nearly all of the island’s remaining large developable property.

“Protecting and permanently preserving such a significant portion of Cuttyhunk is a truly historic achievement for the long-term protection of Buzzards Bay,” said Buzzards Bay Coalition President Mark Rasmussen. “This is one of our region’s most unique landscapes. A broad coalition of public and private partners came together to not only protect Cuttyhunk, but also to ensure that the public can continue to enjoy these treasures of the Elizabeth Islands.”

The land protected last week was purchased from the descendants of turn-of-the-century industrialist William Wood who began purchasing much of the land on Cuttyhunk beginning in 1905 and built the island’s two great houses — Avalon and Winter House.

“As stewards of much of the undeveloped land on Cuttyhunk, and following in the tradition of our great-grandfather, William Wood, who established our family’s foothold on Cuttyhunk, we are proud to participate in this preservation plan of our beloved island,” commented Van Spaulding on behalf of his family.

The 68 acres of land purchased by the Coalition and its partners include Barges Beach, the scenic Lookout and Bayberry Hills, a portion of Copicut Neck — all of which will be owned and managed by the Coalition — and Church’s Beach, which will be owned by the Town of Gosnold. All of the properties will be managed as public reserves, ensuring public access to these beautiful, ecologically unique environments.

Days spent swimming, picnicking, and fishing at Barges and Church’s beaches and walks up to the stunning views from the top of Cuttyhunk’s highest points will remain forever part of life on Cuttyhunk.

“I am glad to see more than 300 acres of Cuttyhunk Island’s natural habitat preserved and recognize the dedication from all our community partners to make it happen,” Sen. Warren said. “Thanks to the efforts of the Buzzard Bay Coalition over the past two years, we are able to ensure these exceptional lands and natural habitats are preserved, managed, and protected for generations to come.”

Congressman Bill Keating (D-MA) said, “The environmental benefits of permanently protecting land on Cuttyhunk cannot be understated — and residents of the island and visitors arriving on the ferry from New Bedford will be able to enjoy this land, undeveloped and pristine, for generations to come.”

Beyond public access and recreation, the acquisition will further a number of important conservation purposes. For example, the two beaches bookend the island’s federally recognized “harbor of refuge,” an important navigational feature at the entrance to Buzzards Bay. The protected land will also preserve water quality, both of the Bay and of the island’s only public drinking water supply, as well as protect unique maritime island vegetation and a variety of birds, fish and wildlife, including rare species. 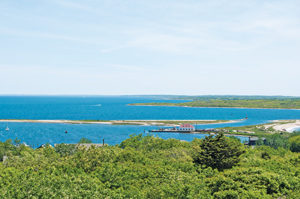 Lookout Park, also known as Lookout Hill, is part of acreage that has been preserved on Cuttyhunk in the Elizabeth Islands and will be open to the public. Photo courtesy of the Buzzards Bay Coalition.

Earlier this year, the Common­wealth of Massachusetts awarded $1.4 million for the project through the Municipal Vulnerability Prepared­ness (MVP) Action grant program, which aims to strengthen the Bay State’s resilience in the face of climate change and rising sea levels.

In spring of 2019, voters at the Gosnold Town Meeting unanimously approved contributing $400,000 to the campaign.

“The selectmen are thrilled that the Coalition’s acquisition of these 68 acres and a conservation restriction on additional acreage will preserve these extraordinary lands for future generations to enjoy. We are so appreciative to the many supporters who made these acquisitions possible, and look forward to our continuing partnership with the Coalition,” said Gail Blout, chair of the Town of Gosnold’s Board of Selectmen.

The project was also awarded a $400,000 state L.A.N.D. (Local Acquisi­tions for Natural Diversity) grant, a $300,000 state grant to guard the public drinking water supply on the island and a Municipal Mini-grant from the Buzzards Bay National Estuary Program, a joint program of the Massachusetts Office of Coastal Zone Management and the U.S. Environ­mental Protection Agency (EPA).

“We are happy to do our part to support Gosnold and congratulate the Buzzards Bay Coalition for their successful efforts to cobble together grants, coordinate programs and work with Gosnold residents to secure much needed matching funds to make the protection of these 68 acres of important coastal habitat and natural resources reality,” said Joe Costa, Executive Director of the Buzzards Bay National Estuary Program.

The Massachusetts Department of Conservation and Recreation (DCR) helped to coordinate one of the large federal grants and the overall effort received important technical support from the Martha’s Vineyard Commission.

Completing the fundraising was $1.4 million in private donations from 198 Cuttyhunk residents and people who cherish the island.