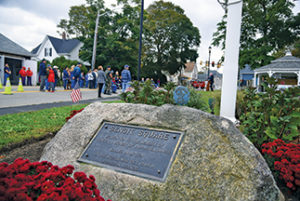 Approximately 75 people attend a ceremony on 10/20/18 remembering WWI casualty PFC Ernest Benoit at Benoit Square in Fairhaven, which was named after him in 1928. Photo by Glenn C. Silva.

The North Fairhaven Improvement Association commemorated the death of PFC Ernest Benoit, US Army, who was killed in WWI on 10/13/1918, just seven days shy of his 28th birthday, and 29 days before the end of the war. He was the first Fairhaven resident killed in action in World War I. Benoit Square was named after him in 1928 by a Town Meeting vote. The cere­mony, held on 10/20/2018, was held on his birthday. 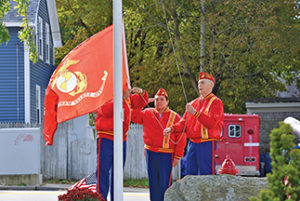 (L-R) Marine Veterans Donald Leblanc, Ellie Reed, and Allen Days raise and salute the US Marine Corps flag at the 100th anniversary ceremony on 10/20/18 remembering WWI casualty PFC Ernest Benoit at Benoit Square, which was named after him in 1928. Photo by Glenn C. Silva.

Ted Silva, who emceed the event, told the crowd of about 75  that he felt PFC Benoit would be “very disappointed” if he were “looking down” on the activities, because WWI was supposed to be the war to end all wars.

Mr. Silva also told the story of Pvt. Benoit’s “buddy,” Enos Bettencourt of Pennsylvania, who was originally from Portugal. He quoted from articles in the Fairhaven Star from 1918, that reprinted some of Pvt. Benoit’s letters. Both Benoit and Bettencourt were killed in action at the same time, in the Meuse-Argonne Offensive in France, as members of Company D of the 321st Machine Gun Battalion. They are both buried in France.

“And although it’s been a hundred years that does not diminish the signficance of what he did,” said Mr. Silva, or the other soldiers from Fairhaven who died since then.”

Mr. Silva told the crowd that 31 soldiers from Fairhaven died in the Civil War, 15 from WWI, 51 from WWII, seven in Korea, eight in Vietnam, and two in the gulf wars. 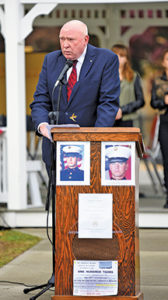 Retired Fairhaven veterans agent James Cochran speaks about all veterans and Fairhaven residents lost in all wars on 10/20/18, at a ceremony remembering WWI casualty PFC Ernest Benoit at Benoit Square, which was named after him in 1928. Photo by Glenn C. Silva.

Other speakers include retired Fairhaven Veterans Agent James Cochran, and Vietnam Veteran George Brownell. The Rev. Bette McClure gave the invocation. The Marines and Boy Scouts also partici­pated in the ceremony, and singers were Lillly Lafountaine and Alyssa Costa. The event was sponsored by the NFIA.

Benoit Square is at the corner of Howland Road and Main Street, where Main Street and Adams Street merge. A memorial to LCpl. Patrick Gallagher is also in the square. It is a public space with a gazebo that is used for events throughout the year. 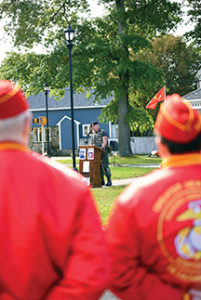 Veterans of the US Marine Corps listen as George Brownell addresses the crowd on 10/20/18, at a ceremony remembering WWI casualty PFC Ernest Benoit at Benoit Square, which was named after him in 1928. Photo by Glenn C. Silva.