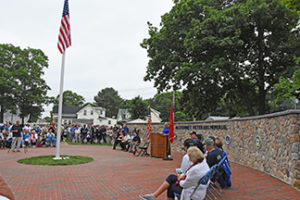 Tom DeCosta emcees at the dedication of the Acushnet Veterans Memorial at Pope Park on Main Street in Acushnet on Sunday, 6/24/18. The projecr, which used no public funds, took 12 years to be completed. See page 12 for story. Photo by Beth David.

It took 12 years, but now it is done, and without money from the town coffers. Acushnet’s Veterans Memorial was dedicated on Sunday, 6/24.

Emcee Tom DeCosta told the 200 or so people gathered that the com­mit­tee decided early on that they wanted a memorial honoring all veterans, not a single person or a certain branch, or era.

“We wanted to memorialize all veterans, past, present and future. This became our mantra,” said Mr. DeCosta. “You see, when a young person joins the military, the first thing they make you do is take an oath….at that point you have no idea what lies ahead of you.” 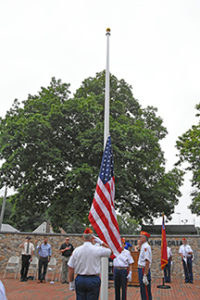 The Marines raise the flag at the start of the ceremony dedicating the Acushnet Veterans Memorial on Sunday, 6/24/18. Photo by Beth David.

Many of the veterans in the crowd chuckled at that. There were many chances for chuckles during the pro­ceed­ings, with speakers and audience members alike taking light-hearted jabs at various branches of the service.

But underlying it all was the serious business of honoring all those who served, are serving, or will serve in the United States military.

The long curved, stone wall has plaques with the insignias of the five branches of the military (Army, Marines, Navy, Air Force, Coast Guard) on it, a large brick area with a flag pole, and five heavy metal benches, one for each branch.

The curvature, which was difficult to achieve, is designed to be welcoming, “Like the out-stretched arms of someone offering a hug,”said Mr. DeCosta.

Also to add a warm feeling, the committee shied away from the often used black granite, using instead the same type of stone used for the town hall, Russell Memorial Library, and the United Methodist Church.

“Its use in construction is uniquely Acushnet,” said Mr. DeCosta.

Mr. Casey told the crowd a little bit about what it was like to go to basic training and to serve overseas as a nurse anesthetist. He joked about a monstrous desert spider and how each member of the various branches would deal with it: the Marines “would eat these things alive.” 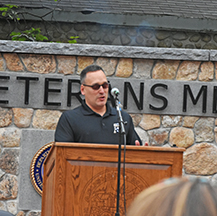 Lt. Colonel Jonathan Casey, US Air Force, speaks at the dedication of the Acushnet Veterans Memorial on Sunday, 6/4/18. Photo by Beth David.

On a more serious note, he said he wanted to pay homage to the older veterans, and especially those who “gave all,” and their families.

“Nothing good happens in war, but I will say that advances in trauma care over the last two decades has been nothing short of amazing,” said Mr. Casey.

“PTSD is the new frontline our vets face on a daily basis,” said Mr. Casey.

He compared the war on terror to a  game of Whac-A-Mole, that will not be won anytime soon. He asked that people not let the war be a forgotten war, and asked people to support Mission 22, named for the 22 veterans who commit suicide each day

Mr. DeCosta introduced Senior Airman A.J. Ruiz, who served as a medic and a firefighter in the Air Force. Mr. DeCosta said that AJ was a perfect example of the success of the GI Bill. He has graduated from Franklin Institute of Technology and is going to Wentworth next semester.

Mr. Ruiz said it was so hot on the runways of Iraq and Afghanistan, that their boots would melt.

“There was a lot of sacrifice put out there,” he said. “It’s not easy to wake up every day as a veteran.” 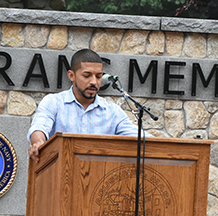 Senior Airman, A.J. Ruiz, US Air Force, speaks at the dedication of the Acushnet Veterans Memorial on Sunday, 6/4/18. Photo by Beth David.

He called Post Traumatic Stress Disorder (PTSD) a “silent killer,” and said he was medically retired because of it.

“I’m above ground, still living, and making the best of it,” said Mr. Luiz.

He asked people to remember those who took their own lives, and  gave out the suicide hotline number, 800-273-8255.

“When you hear about our politicians trying to cut the GI Bill and taking away benefits from the young men and women of the military, please contact your representative and voice your disapproval,” said Mr. DeCosta. “It wasn’t too expensive to send them there, but it’s too expensive to bring ’em back. The GI Bill can’t disappear.”

Mr. DeCosta thanked the many people who worked on the park over the years, including Ebner Pope, who donated the original seven acres to create Pope Park in honor of his father Elihu Pope.

“As it turns out Ebner held the rank of Lieutenant. We never knew we would be building a veterans memorial on land donated by a veteran,” said Mr. DeCosta.

Over the years, many people donated, some of limited means to the point that he did not want to take their donations, but they insisted. The in-kind donations brought down the cost from hundreds of thousands of dollars to about $50,000.

“You know who you are. We thank you from the bottom of our hearts,” he said, adding no matter how small the donation, “You take ownership of this.”

Mr. DeCosta also emphasized the role of the families of veterans, and urged people to thank them as well. 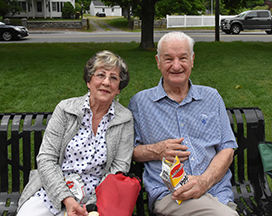 Dolores (Dolly) Souza of Acushnet and Victor Samolis of Dartmouth at the dedication of the Acushnet Veterans Memorial on 6/26/18. Photo by Beth David.

“This was his dream,” said Pat Krouzek of her late husband Robert, a US Navy veteran, who was singled out during the ceremony for his volunteer work on the memorial. “He was very proud of his service in the US Navy.”

She said she had mixed emotions, because he could not be there.

“I’m sure he’s looking down on us,” she said, adding that he’d be “ecstatic.”

She said he helped with fund-raisers for many years, right up until he got sick. Even then, he went to all the meetings.

Fiona White said she had just lost her brother who served as a Marine and then went back in the Navy, so she bought two bricks for him.

“It’s some place to come and sit,” and remember him, she said. “It’s bittersweet.”

“It’s fabulous,” said Nicky Gadbois. who supported the project with her husband Steve.

Dolores “Dolly” Souza of Acushnet and Victor Samolis of Dartmouth, took a moment to sit on a bench with lunch.

“I wanted to come to honor veterans and this beautiful memorial,” said Ms. Souza.

“A lot of work went into this,” said Mr. Samolis.

“It was a nice crowd,” he said, and the ceremony was “very, very good.”

The program also included the Boy Scouts, raising of the flag by the Marines, the national anthem sung by Nicole Contois, and free lunch. 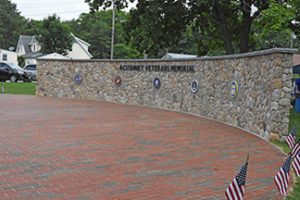 The Acushnet Veterans Memorial is a curved wall with plaques showing the insignias of the five branches of the US military. It was dedicated on Sunday, 6/24/18. Photo by Beth David.