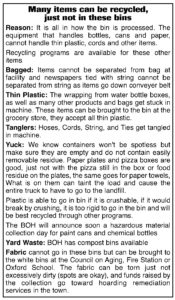 The Fairhaven Board of Health received $30,000 from the state to implement the “IQ Kit,” designed to improve recycling rates. The goal is to reduce contamina­tion in the recycling bins. Residents have been using the 95-gallon recycle carts, with orange covers; and the 65-gallon trash carts, with blue covers, since March of 2015 in Fairhaven.

In the last few weeks, four people have been checking carts in Fairhaven to educate residents about what, exactly, is allowed in the recycling bins and what is not.

The BOH mailed out postcards to every mailing address in Fairhaven, ran ads in local press, added informa­tion to the BOH page on the town website, and created a video that will soon be available online.

Fairhaven Health Agent Mary Freire-Kellogg said that things have changed in the recycling world and the town will pay a hefty price if people do not get educated about those changes, and modify their behavior.

“The list of things that can go in your recycle bin has gotten very small,” says Ms. Freire-Kellogg on the video. 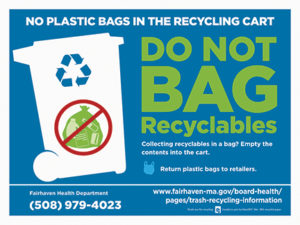 In the past, almost everything that was plastic, glass, or cardboard, was acceptable in the recycle bin. But changes in the world market mean that many of those items are no longer accepted curbside. The biggest problem is grocery bags, the second is “tanglers,” such as extension cords.

“A lot of things can be recycled, just not in these bins,” says Health Department Intern Dan Shea on the video.

For people who are especially conscious of recycling, it is important for them to understand how mistakes can backfire, big time.

ABC collects the recycling from the bins and takes it to Howland Disposal Services. If a load is contaminated, the whole load gets rejected.

Ms. Freire-Kellogg said that Howland is rejected 10 truckloads of recycling every day because of contaminants. They send that to a landfill, including all the items that are recyclable. So the whole point of recycling or re-using backfires.

It is actually worse for Fairhaven resi­dents who want to be environ­mentally conscious, because our trash goes to SEMASS, the waste-to-energy plant, where it is burned to make electricity. And the plastics from a rejected load could end up in a landfill, forever.

All hope is not lost, though, for those items that cannot go into the bin. The recycling center on Arsene Street accepts most of the other items.

Items that should go into the recycle bin include bottles, plastic jugs, newspaper, card­board (flattened).

What should not go into the bins includes plastic wraps of any kind, small packaging, such as candy wrappers.

Anything that had food in it should be rinsed and the caps replaced before placing in the bins. Those are reused. If you do not have the cap, you can still put the bottle or jug in the bin. Do not put the caps in separately, they should just go in the trash if they are not properly matched up to a bottle. 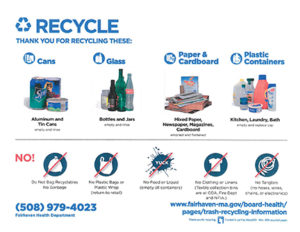 The crew checking bins will mark the bin with an “oops” and turn it so that the truck will not pick it up, leaving the homeowner with a whole month between pick-ups, since Fairhaven collects recycling every two weeks. Some residents have complained angrily about their bins being rejected.

Ms. Freire-Kellogg said that the program is not meant to be punitive. There will not be any fines. A bin is only rejected if it has at least four prohibited items.

One big change of an item not accepted is colored take-out containers. Although marked as recyclable, they are not allowed in the bin, only clear ones are accepted. The colored containers can be taken to Arsene Street.

All “rigid plastic,” such as toys, lawn furniture and buckets, can go to Arsene Street.

The number one concern is plastic bags. They are recyclable, but should not be put in the bins. They can go to the grocery store, where all plastic is accepted.

There is a market for the bags, they make decking from it, said Ms. Freire-Kellogg, so it is a worthwhile effort to get the bags to the grocery store. If you put them in the bin, the whole load could end up in a landfill.

One misconception is that all paper is acceptable. All kinds of paper are, but not if shredded. Ms. Freire-Kellogg suggests using it in the garden for weed control. 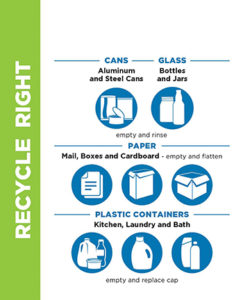 Paper and cardboard should be loose in the bins, not tied up.

The second big concern is tanglers, such as extension cords, rope, twine, belts, etc. They get wrapped around the machines and cause a lot of problems. So if one is spotted, then the whole load is rejected.

It may also surprise people to know that prescription bottles are considered hazardous waste, since they contain residue from the medication in them. Those can go to the police station which accepts unwanted medication for proper disposal.

One Neighb News reader com­plained that his bin was rejected because he had a plastic straw in it. Ms. Freire-Kellogg said that the plastic cups from fast-food restaurants are accepted, but the covers and straws are not because they get stuck in the machines.

Clothes and other textiles, such as clean rags and stuffed animals are also items that are recyclable, but not accepted in the bins. The town has three drop-off locations for textiles: the Senior Center/Council on Aging, the Fire Station on Washington Street, and the North Fairhaven Improve­ment Asso­ci­a­tion building in Benoit Square.

The town gets paid $100 per ton for those items. That money is then used for hoarding remediation in Fairhaven, to help hoarders get decluttered.

“And the strangest thing of all, and I don’t understand this,” says Ms. Freire-Kellogg on the video, “but we have seen so many diapers, dirty diapers, in the recycle bin. That clearly is yuck, and that has no business being in anybody’s recycle bin. That is trash.”

The Board of Health has several printed pieces explaining what is and what is not recyclable, and directing people to where they can take c. All are available on the BOH website at https://www.fairhaven-ma.gov/board-health/pages/trash-recycling-information

The video will be available through a link on the BOH website soon.