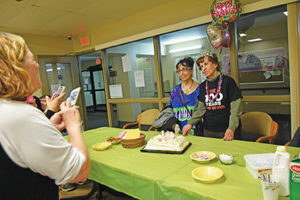 Ellen Martin is clearly losing her patience with all the picture-taking at her 100th birthday party on 3/18/19, as her daughter, Rhonda Lee Whitehair, joins her by her side. Photo by Beth David.

Ellen Martin insists there is no secret to her long life.

“I’m a happy person,” she said on the occasion of her 100th birthday this week. “I had a good marriage, happy home life, two good children and grandson, and I live in a nice place.”

She was talking about Fairhaven Village, where she has lived for about seven years. She grew up in Dartmouth, lived for a time in New Bedford, but mostly lived her married life in Freetown. Then she moved a bit down south to be with her daughter. But eventually came back “home” to the New Bedford area.

Her husband was a “New Bedford guy,” she said. She knew his sister, and that’s how they met.

She likes living in Fairhaven Village, she said, because people are so nice and help each other out. She singled out Rita Mayer, the culprit in the surprise party and especially the surprise press presence. Ms. Martin said Rita lives close to her, checks on her all the time, and helps out.

“She helps everyone,” said Ms. Martin.

The first day she moved in, Rita was there to lend a helping hand.

“It’s a nice place to live.

She had friends and acquaintances around her, Her daughter Rhonda Lee Whitehair with her husband CW, her niece Charlotte Stone, and her grandson Eric Martin to celebrate the big day. Her son Forrest lives in California, said Ms. Martin, and is not well enough to travel, but his son Eric was there. 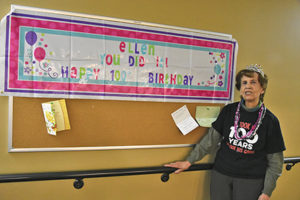 Ellen Martin stands next to a banner announcing her 100th birthday on 3/18/19 at Fairhaven Village in Fairhaven. Photo by Beth David.

Ms. Martin’s husband, Lawrence, aka Larry, drove a Union Street Railway bus for 36 years. They were married for 58. She worked in mills, and made clothes for years. She even made wedding gowns, worked as a bridal con­sultant, and managed a bridal store in Taunton

She sang in a quartet called the “Whalerettes” and, according to her daughter, often made all their outfits. She liked square dancing, too.

She won’t sing anymore, said her niece, because she thinks her voice is gone. And, dancing is a bit tough now, too. But she still drives herself to the grocery store.

“I play a lot of games on the computer,” said Ms. Martin. “I do everything and anything. I’m not as good as I was, though.”

She plays a couple of different kinds of solitaire, and a few other games, but she’s not online.

“I taught myself,” she said.

She had two brothers and two sisters, who are gone now. She noted that her brother was Leonard Bettencourt who worked at New Bedford Voc-Tech.

“He was well known,” she said.

Her daughter said that Ellen was always very active, and still is. She crochets, still drives, and takes care of herself.

When Rhonda Lee was young, her mother made her clothes. She said she would show her the newest style and her mother would make it.

“She was very frugal,” said Rhonda Lee, and a strict mother, too.

When Rhonda Lee got out of hand, her mother would threaten to send her to Sacred Hearts Academy, a home for girls, and the same building that now houses Fairhaven Village. 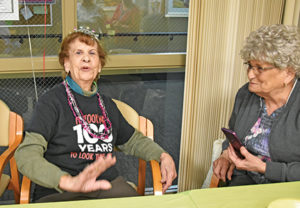 Ellen Martin gives a photographer what-for for taking her picture on the occasion of her 100th birthday, while her niece, Charlotte Stone chuckles. Photo by Beth David.

Grandson Eric said that he remembers lots of healthy food at his grandmother’s, and just being able to hang out, play games, and play in the open spaces of Freetown.

And strudel, definitely Ellen’s “famous strudel,” and listening to the Carpenters on the record player.

“She’s the best grandmother in the world,” said Eric.

Ellen’s niece Charlotte remembers making quilts with her aunt. She still spends time with her when she can; Ellen likes to go out to eat.

A few others showed up for the party, too, people from the building, invited personally by Rita Mayer, who threw the big bash; and Nercy Martins, 33, who said Ms. Martin hemmed up a dress for her just a few years ago.

Jean Reis lives at Fairhaven Village, and said she did not know Ms. Martin that well, but that she was always friendly.

“I told her I wanted to be like her when I grow up,” said Ms. Reis. “She said ‘you can’t be like me, you don’t dye your hair. My husband told me never go gray.’”

“She’s a very nice lady, friendly,” said Ms. Mayer, adding that Ms. Martin did not want a party, so, they just did not tell her about it. “You don’t turn 100 that often.”

So, even though she swears she has no secrets, does Ellen Martin at least have some advice?

She would not talk about the changes in the world since she was a young woman, except to say that people are not the same. She doesn’t much like the tattoos and earrings and how people are so quick to “shack up” and not get married.