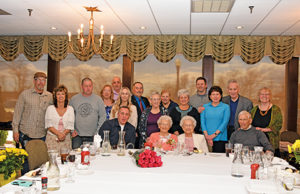 Friends and family are all smiles as they pose for the local free sheet with two cousins, Anna Quintin of Fairhaven (seated middle left), and Cecelia “CB” Cowell of Acushnet (seated middle right), as they celebrate reaching 100 years old at a party at White’s of Westport on 4/10/22. Photo by Beth David.

Anna Quintin and Cecelia “CB” Cowell have been celebrating their birthdays together for a full century now. Their mothers were sisters and gave birth to the cousins one week apart, with Anna having the distinc­tion of being one week older.

They celebrated their 100th on Sunday, 4/10/22, at White’s of Westport, surrounded by family and friends.

Ms. Cowell said she was so surprised, she cried.

Both women live on their own, Ms. Quintin in Fairhaven, and Ms. Cowell in Acushnet. Asked about their secret for living so long and staying independent, Ms. Quintin did not hesitate for a second.

She worked “turning leather” at a handbag factory in New Bedford for 15 years, raised five children, and ran three businesses with her husband Ernest. At various times, the couple owned Quint’s Kitchen, The Bridge Cafe, and North Cafe.

She also said she loved taking care of her grandchildren every chance she got. 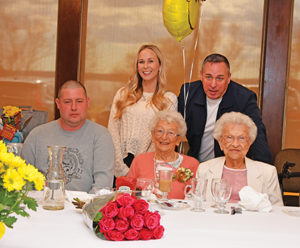 Ms. Cowell would not venture a guess at a secret, just saying she’d have to think about it.

Michael Quintin, Anna’s grandson, traveled from Germany for the occasion, because turning 100 “doesn’t happen every day,” he said.

He remembers his grandmother as a kind woman with a lot of wisdom.

“We always understood each other,” he said, adding that she has always been funny and lighthearted, along with her wisdom.

One of those wise thoughts is to sometimes put a problem on the “back burner, where it may disappear magically,” said Mr. Quintin. “I think she just enjoys life.”

“She was always a good mother,” said Bob Quintin, adding that you have to eat when you go to her house.

“She was the best,” said Anna’s daughter Patricia Young, noting that her mother made their clothes. and taught her daughters how to sew and knit, too.

Even so, “She was very sup­portive,” said Ms. Young of anything she wanted to do.

“She loves her family so much,” said daughter-in-law Louise Quintin, adding that she took care of sick family members over the years and was always there for everyone. “She’s strong as a rock.”

Louise said when she met her mother-in-law, she was 78-years old and on her hands and knees washing the floor.

“She’s so independent,” she said.

CB’s daughter Joan Taylor said her mother, too, always had a great sense of humor.

“She is very caring, loving,” said Ms. Taylor. “She loves us, she loves her grandchildren.”

She also said it was important to not that her aunt Anna has a “great faith,” and watches the mass on TV, and says the rosary daily. Just don’t call during Wheel of Fortune.

Anna’s son Ron said his mother and his aunt were always “best buddies.”

He said they lived in the north end of New Bedford, and would walk around, and that’s how they met their husbands. They lived, worked, and socialized in the neighborhood.

“She’s incredible,” said Heather. “She’s the rock of the family.”

She said her grandmother was kindhearted, funny, funky (yes funky), getting daring with her clothes at times, but always “well put together.”

And Anna is also a rock in her neighborhood, where she has lived for decades.

“She knows everyone and everything that’s going on in the neighborhood,” said Heather.

She said her grandmother stays young by staying active.

The Fairhaven Select Board issued a proclamation to Anna, which states in part: “Longevity of life is a blessing for an individual and for a community which benefit from the knowledge, creativity, and experience this indi­vidual brings to all,” and declares April 10, 2022 “Anna Quintin Day.” 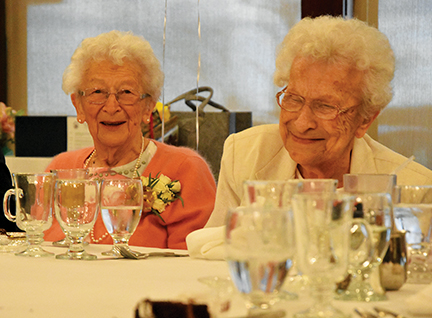 Cousins Anna Quintin of Fairhaven (left) and Cecelia “CB” Cowell of Acushnet share a laugh as they celebrate reaching 100 years old at a party at White’s of Westport on 4/10/22. Photo by Beth David. 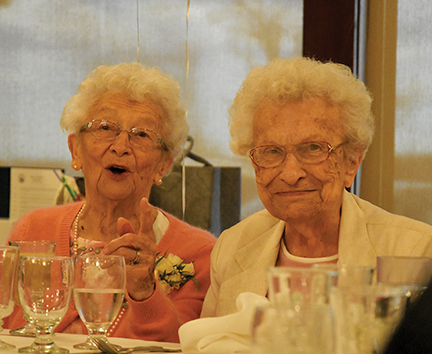 Anna Quintin of Fairhaven (left) gestures to a family member while her cousin Cecelia “CB” Cowell of Acushnet shares the joke as they celebrate reaching 100 years old at a party at White’s of Westport on 4/10/22. Photo by Beth David. 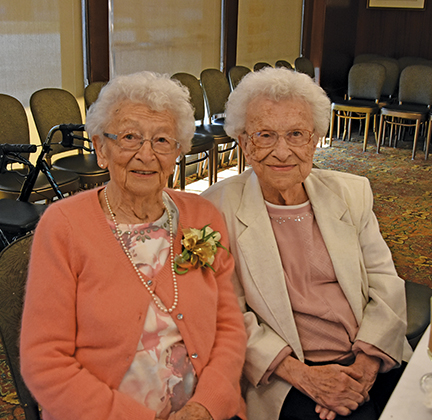 Cousins Anna Quintin of Fairhaven (left) and Cecelia “CB” Cowell of Acushnet pose for the local free sheet as they celebrate reaching 100 years old at a party at White’s of Westport on 4/10/22. Photo by Beth David.